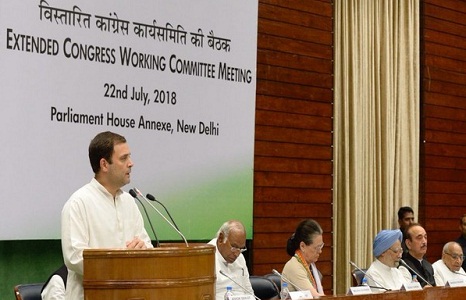 Biggest challenge before the congress party is to expand the vote base:Rahul Gandhi

in National July 22, 2018 Comments Off on Biggest challenge before the congress party is to expand the vote base:Rahul Gandhi 721 Views

New Delhi:22/7/18; Congress President Rahul Gandhi on Sunday said that the biggest challenge before the party is to expand the vote base, and stressed the need for a strategy to reach out to people to win back their trust.Addressing the first meeting of the newly constituted Congress Working Committee (CWC), Gandhi said, “Expansion of our party vote base is one of our biggest tasks. In each constituency, we have to find people who have not voted for us and develop a strategy to reach out to them and win back their trust.””CWC gave voice to every single Indian. It accommodated views from different perspectives and gave space to the weakest voices of India. Our collective challenge is to shape our current CWC to that level,” Gandhi said.

“The CWC evolved during the freedom struggle. It’s a forum where India expressed, debated, contested and consented ideas to take the nation from colonial rule to freedom,” he added.He also stated that the party’s short-term goal is to come together with other political parties and win the 2019 elections, following which they will undo the damage done by the Bharatiya Janata Party (BJP) and the Rashtriya Swayamsevak Sangh (RSS).

“In the short term, we can come together with other parties and win the coming elections. After that, the damage done by the BJP and RSS to India’s institutions will have to be undone. Only the Congress can do this,” Gandhi said.Gandhi has also been authorised by the CWC to take decisions on pre-poll and post-poll alliancesAfter the meet, Gandhi told media that a group would be formed to look into the overall issue of alliances for the 2019 Lok Sabha Elections.On July 17, Gandhi included first-time state incharges as permanent invitees to the 51-member CWC, which is the party’s highest decision-making body.