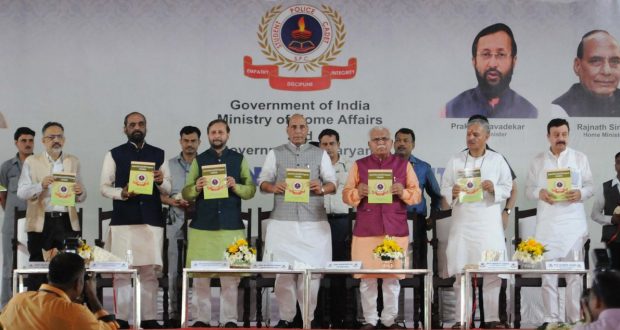 Gurugram:21/7/18;The Union Home Minister Shri Rajnath Singh launched the Student Police Cadet (SPC) programme for nationwide implementation at a ceremony in Gurugram, Haryana today. In his address on the occasion, the Home Minister expressed hope that the SPC would lead to a silent revolution over the years by focusing on character building by imparting moral values to budding minds. He expressed concern that education these days stressed more on mere book reading with little attention being paid towards character building of students, which shows negative effects on society in terms of increased crime.

Shri Rajnath Singh said that coping with rapid modernization and cut-throat competition, schools have focused all their attention towards building careers and rising incomes, creating tremendous pressure among the young minds, he said. While the dawn of new technologies, internet and social media have helped our children keep pace with the changing times, it has adversely impacted our society as we witness the breakdown of the traditional family system and worrying rise in incidents of crimes and rapes, he added. 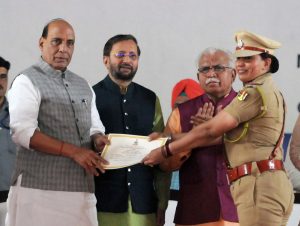 The Home Minister appealed to all stakeholders- teachers, parents, students, police and officials- to participate with enthusiasm and execute the SPC as a Mission Mode project. The SPC project will also help the police assess their image in the public eye and strive for improving confidence and winning trust of the people. SPC initially will be launched as pilot programme in all States and Union Territories.

Earlier the Home Minister launched the theme song and training manual of SPC prepared by the Bureau of Police Research and Development (BPR&D). He also presented cash awards to winners of Logo and motto competition. He also handed over the SPC flag to Haryana Platoon Commander.

The SPC programme focuses on students of Classes 8 & 9 and special care has been taken to ensure that it does not lead to increase in the workload of the students. The programme does not have any prescribed textbook nor is any exam envisaged. Only one class in a month is proposed. The programme seeks to cover broadly two kinds of topics, – crime prevention and control; and values and ethics.

Speaking on the occasion, Union Minister for Human Resource Development, Shri Prakash Javadekar said SPC is a very good initiative which will be launched initially in Government schools and later expanded to cover all schools. He said talent alone is not sufficient for success. Students need discipline and hardwork which will be imparted through SPC. He said SPC will cover around 4 crore students.

In his address, Chief Minister of Haryana, Shri Manohar Lal said the SPC will assist in social construction through personality building of students. He said the students having undergone SPC training will be given advantage in police recruitment.

The ceremony at Tau Devi Lal stadium in Gurugram was attended by thousands of students from all over the country. The gathering was also addressed by Union Minister of State for Home Affairs, Shri Hansraj Gangaram Ahir and Union MoS (I/C) for Ministry of Planning and MoS for Ministry of Chemicals & Fertilizers, Rao Inderjit Singh, BPR&D Director General, Shri AP Maheswari. Union Home Secretary Shri Rajiv Gauba, senior officials of MHA and Haryana State Government were present during the function.