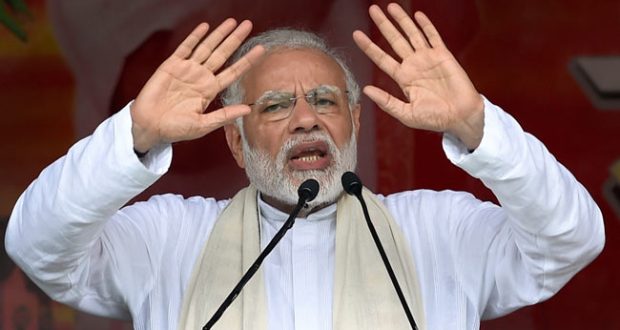 in National July 21, 2018 Comments Off on Prime Minister Narendra Modi dismissed opposition attempts at unity as an opportunity for the BJP 800 Views

Shahjahanpur : 21/7/18;Prime Minister Narendra Modi today dismissed opposition attempts at unity as an opportunity for the BJP and mocked Congress president for hugging him in Parliament, virtually calling it clingy behaviour.

At a farmer’s rally, on his third visit to politically crucial Uttar Pradesh, Modi questioned the motive behind the no-confidence motion moved by the opposition in the Lok Sabha.

Roughly translated, the phrase conveyed unwanted clingy behaviour: “We kept asking the reasons for their no confidence, they failed to answer but clung to my neck.”

The reference was to Rahul Gandhi’s gesture yesterday during the debate walking up to the prime minister’s seat in the Lok Sabha and giving him an unreciprocated hug.

Modi also played with words to assert that the Bharatiya Janata Party’s election symbol the lotus will rise from the mud in the 2019 general election.

“If one dal (party) is added to another dal, then it becomes dal-dal (muck), which is favourable for the ‘kamal’ to bloom,” he said, in an apparent reference to the opposition’s unity attempts.

Modi said the opposition’s bid to join hands is an opportunity for the BJP.