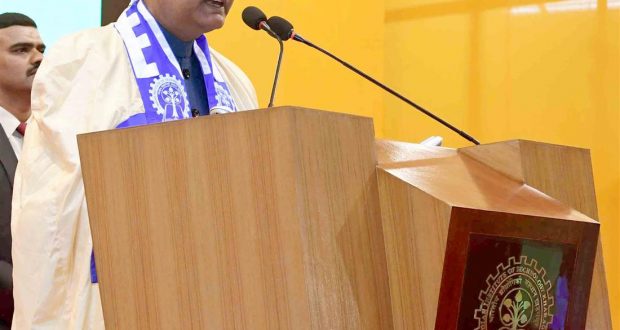 in Education July 20, 2018 Comments Off on President of India addresses annual convocation of IIT Kharagpur 904 Views

Speaking on the occasion, the President said that IIT Kharagpur has its origins in a committee that was set up by the government shortly after Independence to take stock of technical education. The committee was headed by the British Nobel laureate Dr A.V. Hill who recommended the setting up of an institution modelled on the pattern of MIT in the United States. The use of global experts to conceive this Institute was appropriate. Over the years, IIT Kharagpur and in fact the IIT network and community has become an important window to the world. This is in keeping with our country’s and our civilisation’s character. Exchange of ideas, of expertise, of knowledge – across fields, from engineering to economics, from medicine to management – has contributed to our policy choices and our people’s development. We must continue to celebrate this. 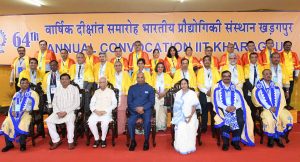 The President said that IIT Kharagpur’s diverse and trans-disciplinary academic portfolio has led to joint research programmes with several institutions. These include the Indian Statistical Institute, the Indian Association for the Cultivation of Science, and Tata Medical Centre, all located in Kolkata. With its wealth of knowledge, it is for IIT Kharagpur to continue to guide the nation by helping find solutions to the pressing problems of our age – whether agricultural productivity or emerging infectious diseases, whether renewable energy or low-cost housing and sustainable cities. He noted that IIT Kharagpur has signed an MoU with the Ministry of Rural Development, Government of India, to set up a Centre for Excellence in Big Data Analytics for Rural Development. This holds great potential for the well-being of so many of our fellow citizens. 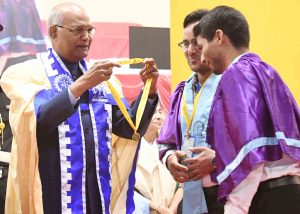 The President, Shri Ram Nath Kovind presenting the degree certificate to a student at the 64th Annual Convocation of IIT Kharagpur, in West Bengal on July 20, 2018.

The President said that in colleges and universities that he has visited across the country, he finds that girl students tend to win more medals and awards than their male counterparts. Yet, when it comes to IITs, the intake of girl students is distressingly low. In 2017, about 160,000 candidates appeared for the IIT Joint Entrance Examination (Advanced). Only some 30,000 were girls. In 2017, 10,878 students got admission into the undergraduate class of the IITs. Only 995 were girls. He noted that 11,653 students are enrolled at IIT Kharagpur. Only 1,925 are girls – a little over 16 per cent. He said that this cannot go on. We need to do something about these numbers. The participation of women in higher education, in science and technology and in the workforce of our country has to rise to fair and acceptable levels within the coming decade. This should be a national priority, and the IIT community must take the lead.

The President also unveiled the foundation stone for the SavitribaiPhule Girls’ Hostel and the APJ Abdul KalamInternatinalVisitors’s Guest House on the occasion.

2018-07-20
Editor in chief
Previous: New ticket confirmation process in Railways
Next: BJD walks out during No-confidence motion in Parliment