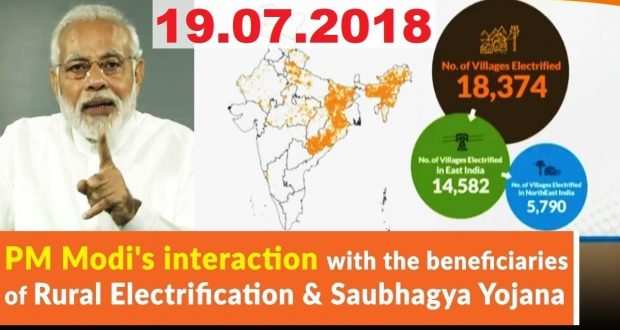 in National July 19, 2018 Comments Off on PM interacts with beneficiaries of Rural Electrification and Saubhagya Schemes acrossthe country through video bridge 1,005 Views

Newdelhi:19/7/18;The Prime Minister, Shri Narendra Modi, todayinteracted with citizens fromvillages across the country which has been electrified since 2014. The interaction covered the beneficiaries of Pradhan Mantri Sahaj Bijli Har Ghar Yojana – ‘Saubhagya’ scheme, through video bridge. This is the tenth interaction in the series by the Prime Minister through video conference with the beneficiaries of various Government schemes.

Expressing delight in interacting with the villagers from the recently electrified 18000 villages, Prime Minister said “People who have not seen darkness, don’t understand the meaning of illumination. Those who have not spent their lives in the darkness don’t realise the value of light. ”

Prime Minister during the interaction said that thousands of villages have been electrified since NDA government has taken over. He added that unlike the false promises given by the previous government, the present government has walked the talk of electrifying every village. The Government not only focused on electrification, but also reformed the distribution systems across the country, Prime Minister added.

These18000 villages which were not electrified even after 70 years of independence were electrified in the last four years.The last one electrified was Leisang village of Manipur in the North east Sector on April 28, 2018. Narendra Modi said that it was difficult to electrify the last 18000 villages, as most were in remote areas, hilly areas and areas with poor connectivity. He added that despite all the difficulties, a dedicated team of people worked hard to ensure that the dream of electrifying every village is achieved.

Prime Minister pointed out that the government has changed the situation in Eastern India which had 14,582non- electrified villages out of 18,000 and out of which 5790 villages were in the North East. He added that the Government accords priority to the development of Eastern India and with complete electrification, now Eastern India can play an even bigger role in India’s development journey.

Prime Minister said that Pradhan Mantri Sahaj Bijli Har Ghar Yojana has been started with the objective of electrifying each and every house in the country. More than 86 lakh household has been electrified through theYojana so far. The Yojana is in mission mode and will ensure electric connection to around four crore households.

Interacting with the Prime Minister, beneficiaries from far away villages explained electricity has transformed their lives forever. From completing work before the sunset and forcing children to study with kerosene lamps, electrification has made life very easily. Most beneficiaries said that the there has been an overall improvement in the quality of life. Beneficiaries also thanked the Prime Minister for bringing light into their houses.