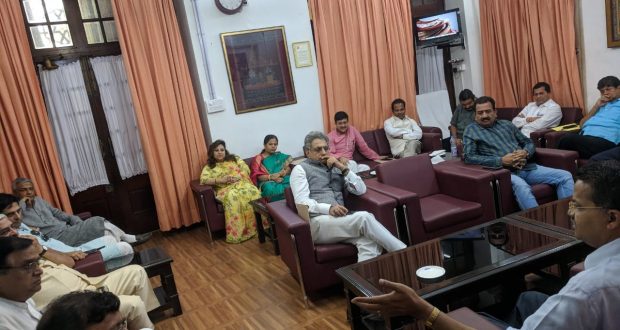 in State News July 19, 2018 Comments Off on Biju Janata Dal has not decided whether to support or go against the no-confidence motion 719 Views

New Delhi:19/7/18; The Biju Janata Dal (BJD) has not arrived at a consensus on the no-confidence motion moved by Congress and other opposition parties against the BJP-led NDA government at the Centre and will take a stand on it on the spot, informed Prasanna Patasani after a meeting of the BJD MPs here.

While the BJD has not decided whether to support or go against the no-confidence motion, a whip has been issued by the party asking all party MPs to remain present during the discussion on the issue in Parliament on Friday.

Ahead of the debate on the no-trust motion, a meeting of the BJD Parliamentary Party was held in the national capital on Thursday which was presided over by its leader Bhartruhari Mahtab. Various issues to be raised by the BJD in the monsoon session were discussed during the meeting. However, the party has not arrived at a consensus on the no-confidence motion.

The BJD sources said the party will take a decision on the no-trust motion on Friday. Whatever decision BJD president Naveen Patnaik takes on this issue will be carried out during the debate in Parliament tomorrow. However, a whip issued by BJD chief whip in the Parliament asked all the party MPs to remain present during the debate.

2018-07-19
Editor in chief
Previous: A pall of gloom descended in Rahanja after five schoolchildren were killed
Next: Madhu Sudan Padhi has been appointed as the Principal Secretary to the Governor