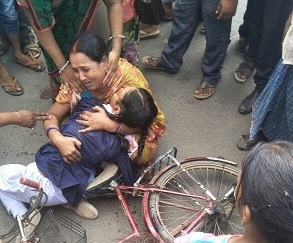 in District Diary July 19, 2018 Comments Off on A pall of gloom descended in Rahanja after five schoolchildren were killed 687 Views

Bhadrak:19/7/18: A pall of gloom descended in Rahanja area of Bhadrak district after five schoolchildren were killed and nine others injured in a road accident on Thursday. A speeding truck ran over the students while returning back home from school.

The enraged locals later indulged in violence and staged a road blockade setting the vehicle on fire. The police reached the spot and tried to pacify the mob.

Expressing grief over the incident, Chief Minister Naveen Patnaik announced a compensation of Rs 2 lakh to the family members of those killed in the accident and free treatment to all the injured.

The accident occurred when the students were crossing the busy National Highway – 16 after closing of the school at around 4.10 pm.

A speeding truck ran over the students of Ranitel High School while they were crossing the road near Rahanja square.

Four of them died on the spot while one succumbed to injury at the hospital. The injured were taken to the district headquarters hospital. Five of the injured are stated to be in critical condition.