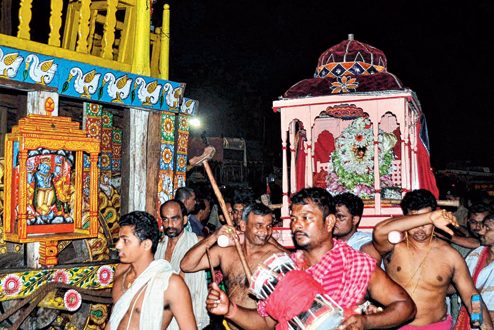 Puri:18/7/18:The grandeur of Rath Yatra continues to draw devotees from around the world. What makes it all the more interesting are the rituals observed during the nine-day annual sojourn. One among them is Hera Panchami.

The Gundicha Temple in Puri, where the Lords are on vacation, will witness this unique ritual on Wednesday. It is observed on the fifth day of Rath Yatra, when the sibling deities leave the Jagannath Temple on their grand chariots amid chanting of hymns and beating of gongs with devotees swarming the Grand Road.

The servitors carry the deity in a palanquin to Gundicha Temple. On arriving at the temple, she expresses her anger, following which, the Lord acknowledges her feelings and gives her agyaan mala assuring her that he would soon return to their abode.

2018-07-18
Editor in chief
Previous: IOCL recommended a CBI probe into grant of permission to gangster Tito to set up petrol pumps
Next: “Love Express” Shubha Mahurat held in city hotel