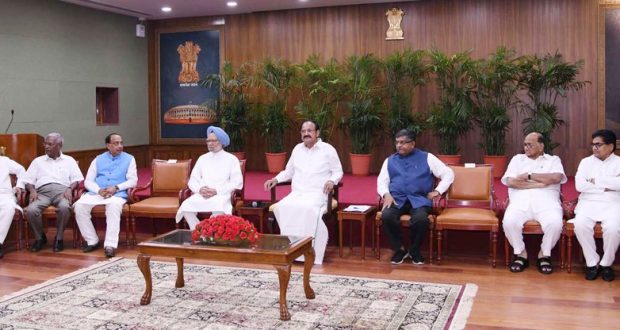 Newdelhi:17/7/18;Expressing serious concern over declining confidence of the people in the Parliament, the Vice President and the Chairman, Rajya Sabha, Shri M. Venkaiah Naidu today asserted that smooth functioning of the House is not the responsibility of the Government alone and it is a joint responsibility of all sections of the House. Conveying his anguish over the last two sessions of the Upper House ending in a ‘loose-loose’ situation for all sections of the House and the people, he urged all parties and leaders to ensure a ‘win-win’ monsoon session and sought their cooperation.

Eight Ministers and 23 leaders belonging to 20 parties today attended the meeting convened by Chairman Shri Venkaiah Naidu, a day ahead of the start of monsoon session tomorrow.

Referring to the happenings in the Rajya Sabha during the last session, Shri Naidu said ‘No party can bring the House to a standstill insisting on Government’s response even as the members and parties have a right to seek such a response. The better way would be to talk it out, walk out or vote out. If the Government of the day is found to be unresponsive to genuine issues, it should be taken to the people instead of forcing adjournment of the House through persistent disruptions”.

Referring to feedback from the people during his tours across the country during the last eleven months, Shri Naidu stated that people are distressed over non-functional Parliament. He also referred to a recent survey in which people have expressed their lack of trust and confidence in the Parliament and political parties.

Shri Naidu urged both the ruling and opposition parties to stop the ‘mutual blame game’ holding each other responsible for persistent disruptions and dysfunctional House. He stressed that it was time to recalibrate the conventional position that it was the responsibility of the Government to run the House and it should be seen as a shared responsibility.

Referring to news reports about the meeting of opposition parties yesterday, Shri Naidu said his hopes of a productive session were rekindled by their assertion of keenness for an effective monsoon session.

Noting that the Parliament is a part of the political system, Shri Naidu urged the leaders not to allow the coming election season in the country derail the House. He said that Parliament is the best forum for articulating different viewpoints and should be made effective use of instead of allowing political considerations play out in the House. He assured the leaders that all issues would be allowed to be discussed as per the Rules of the House.

Former Prime Minister Dr. Manmohan Singh observed that all the leaders endorsed the concerns and sentiments expressed by the Chairman Shri Naidu.

Leader of the Opposition Shri Ghulam Nabi Azad said that over 90% of the parties in the House always desired smooth functioning of the House and those who are agitated over issues of concern to their States need to be appropriately reached out by the Government. He said the opposition has about ten issues for discussion in the House and some of them could be taken up during the monsoon session. He suggested that the Government should start with Bills that have wider acceptance instead of taking up contentious issues.