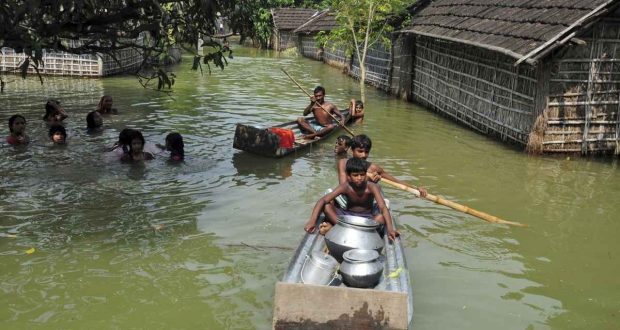 Bhubaneswar :17/7/18; The incessant rain in the past 48 hours, measuring up to 297 mm, could lead to floods in Odisha but the state is well equipped to handle such a situation, its minister has said.

“Of the 30 districts of the state, 26 districts have received heavy rainfall in the past two days leading to flood-like situation in major rivers. The district collectors have been asked to remain alert for possible flood,” Revenue and Disaster Management Minister Maheswar Mohanty told reporters here.

Stating that only four districts — Deogarh, Sundergarh, Kendrapara and Gajapati — received low rainfall, the minister claimed that the govenrment machinery is well prepared to face a possible flood-like situation.

However, the Special Relief Commissioner’s (SRC) office maintained that there is least possibility of any major flood this time as the heavy rains have stopped as the low pressure has weakened. However, the IMD has warned heavy rainfall for two more days in four districts.

Budhabalang river also expereinced a rise in water level at Baripada and NH-5 Govindpur, they said.

Meanwhile, reports received from different districts said that a few bridges were washed away and a approach roads collapsed with a flood-like situation.

Many parts of Puri district including Astaranga, Gopa, Kakatapur blocks have been flooded with rain water. The local people in Puri’s three block areas alleged that waterlogging continued due to closure of the river mouth in Astarang area.

In Kandhamal district, a bridge near Ranipath Ghat in Phulbani was washed away due to the heavy rainfall. Similarly, the approach road of another under-construction bridge also collapsed due to which communication between Phulbani and Boudh has been disrupted.

The residents of the twin cities of Bhubaneswar and Cuttack also experienced waterlogging due to the heavy rainfall.

The Bhubaneswar Municipal Corporation (BMC) has set up a helpline number to address complaints on situation arising due to waterlogging.