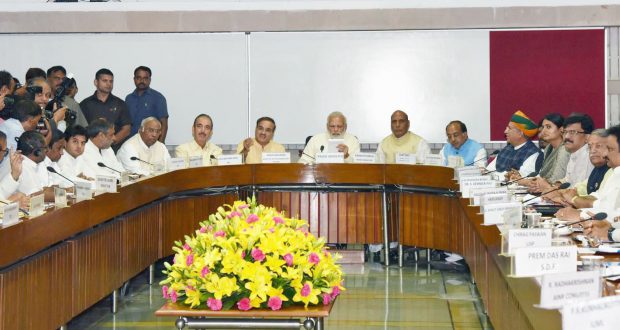 The Prime Minister, Shri Narendra Modi and other leaders of various parties in both the Houses of Parliament, at the all-party meeting, on the eve of the Monsoon Session 2018, at Parliament House, in New Delhi on July 17, 2018.

in National July 17, 2018 Comments Off on Government holds All Party Leaders Meeting ahead of Monsoon Session 2018 of Parliament, beginning tomorrow 765 Views

Newdelhi:17/7/18;Addressing floor leaders of parties in the Rajya Sabha and Lok Sabha here today, ahead of the Monsoon Session 2018 of Parliament beginning tomorrow, Prime Minister of India, Shri Narendra Modi said that Government gives huge importance to the issues raised by all Political Parties and urged all Political Parties to collectively strive to create a constructive atmosphere in Monsoon Session to achieve National Good. Shri Modi expressed confidence that all political parties would cooperate on smooth running of the Parliament and undertake constructive discussion on issues of national importance.

A host of issues were brought up by the leaders of parties during the meeting. There was a consensus across party lines on ensuring smooth functioning of the Parliament without disruptions and deadlocks to be resolved through constructive discussions in both the Houses.

Union Minister of Parliamentary Affairs, Shri Ananthkumar, later briefing media persons said that the Government has requested all parties, especially the opposition, for their co-operation for the smooth functioning of the House. “The people of India want the Parliament to function. Government calls for cooperation from all parties in country’s interest”, he said. The Minister informed that all parties were in favour of a productive Monsoon session. The Government is always ready to discuss on the floor of the House, any issue as permitted under Rules of Procedure. The Government will leave no stone unturned to facilitate smooth functioning of the Parliament during the ensuing Monsoon Session, he added.

Shri Ananthkumar further informed that the Monsoon Session, 2018 of Parliament is scheduled to be held from Wednesday, 18th July, 2018, and subject to exigencies of Government Business, the Session may conclude on Friday, 10th August, 2018. The Minister said that the Session will provide a total of 18 sittings spread over a period of 24 days and 48* items have been identified for being taken up during the Monsoon Session, 2018. (*Includes 46 Bills and 02 financial item)