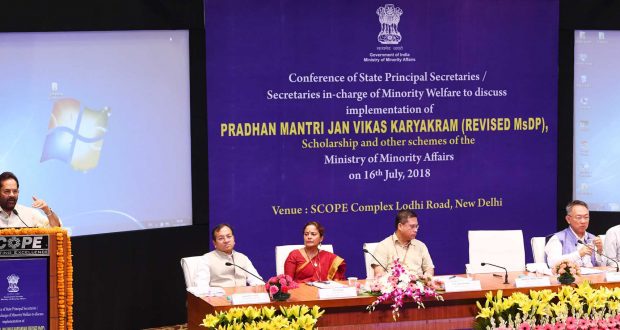 Newdelhi:16/7/18;Union Minister for Minority Affairs Shri Mukhtar Abbas Naqvi today said here that a campaign has been started by the government on war-footing to provide basic amenities to ensure educational empowerment of girls belonging to Minority communities in 308 districts across the country.Addressing National Conference of Principal Secretaries/Secretaries In-Charge of states/UTs dealing with Minority affairs organised here, Shri Naqvi said that the Central Government, keeping in mind the educational empowerment and employment oriented skill development of Minority girls, is providing school, college, polytechnic, girls hostel, ITI, skill development centre etc under “Pradhanmantri Jan Vikas karykram” in those “backward and ignored” areas which had been deprived of these facilities since the Independence.Shri Naqvi said that the lack of such facilities was the reason behind low literacy rate among Minorities, especially Muslim girls.  During the last 4 years, under MsDP, 16 Degree Colleges, 2019 School Building, 37,267 Additional Classrooms, 1141 Hostels, 170 Industrial Training Institutes(ITIs), 48 Polytechnics, 38,736 Anganwadi Centres, 3,48,624 lAY(PMAY) houses, 340 Sadbhavna Mandaps, 67 Residential Schools, 436 Market sheds, 4436 Health Projects etc have been constructed by the Modi Government. This has led to significant improvement in lives of weaker sections, Minorities especially women. 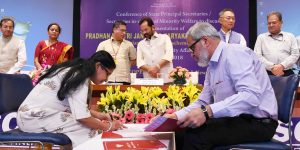 The Minister informed that “Pradhan Mantri Jan Vikas Karyakram” (PMJVK) has been proved to be an effective mission of Prime Minister Shri Narendra Modi-led NDA Government to fulfil the commitment to “Development with Dignity” and “Inclusive Growth”. He said that 80 percent of the resources under the PMJVK have been earmarked for projects related to education, health and skill development. About 33 to 40 percent of resources under the PMJVK have been specifically allocated for women centric projects. The revised scheme is further leading to lessening of the gap between the national average and the minority communities with regard to backwardness parameters. Earlier only those Cluster of Villages which were having at-least 50% population of Minority Community were taken. The population criteria has been lowered to 25% with the commitment to “inclusive growth”. Inclusion of Minority Concentration District Headquarters along with the Minority Concentration Towns having population more than 25,000, Minority Concentration Blocks and Cluster of Villages as per Census, 2011 data, has extended the coverage of population of minority communities.

Mr.Naqvi said that under PMJVK, land of State Government/State Government bodies, land of other organisations such as Security Organizations, Waqf, Gram Panchayat can also be utilised for various educational, skill development projects. The state governments have equal responsibility to ensure better and effective implementation and success of PMJVK.Mr. Naqvi said that socio-economic-educational empowerment of Minorities, weaker sections, poor is equal responsibility of the Centre as well as the states. He said that steps taken by the Modi Government aimed at inclusive growth has ensured that today Minorities have been brought into mainstream development. Schemes such as “Seekho aur Kamao”, “Usttad”, “Garib Nawaz Kaushal Vikas Yojana”, “Nai Manzil”, “Nai Roushni”, “Begum Hazrat Mahal Girls scholarships” etc have proved to be the guarantee of empowerment of Minorities especially girls.