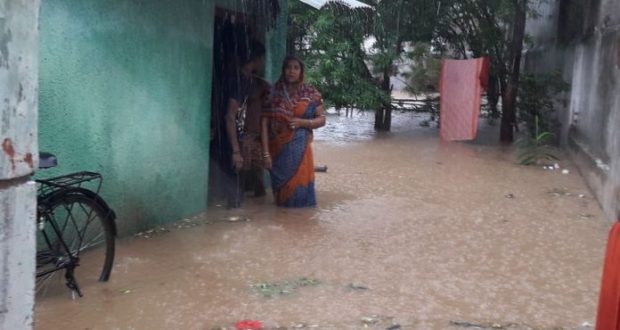 in State News July 16, 2018 Comments Off on Normal life was thrown out of gear as heavy rain lashed many parts of Odisha 801 Views

Bhubaneswar:16/7/18 Normal life was thrown out of gear as heavy rain lashed many parts of Odisha today because of a Well Marked Low Pressure (WMLP) over the Bay of Bengal.

Though many parts of the State were water-logged following the heavy downpour, the Special Relief Commissioner special relief commissioner (SRC) Bishnupada Sethi said “the government is keeping round-the-clock vigil over the flood-like situation in Kalahandi, Rayagada and Ganjam districts.

There is no reason for alarm as intensity of rain is likely to be less in next 24 hours, he said.

During last 48 hours, heavy rainfall occurred in many parts of the state. Average rainfall of the state remained at 33.9 mm and 41.8mm respectively in past two days. The following 12 districts which recorded rainfall of more than 50 mm on either of or both the days are Kalahandi, Puri, Rayagada, Ganjam , Jagatsinghpur, Nuapada, Khordha, Bolangir, Bargarh, Gajapati, Nabarangangpur and Nayagarh

River Vamsadhara had crossed the danger level at Gunpur (Rayagada district) as well as Kasinagar (Gajapati district) yesterday (15.07.2018). However, the water level quickly receded. Presently, the river is flowing below danger level and is in falling trend. There is no flood situation in any river system in the state, according to officials.

2018-07-16
Editor in chief
Previous: Baripada township showcased feminism power with the pulling of the chariot only by women.
Next: Communist Party of India (Maoist)call in protest against Andhra Pradesh’s ambitious Polavaram project