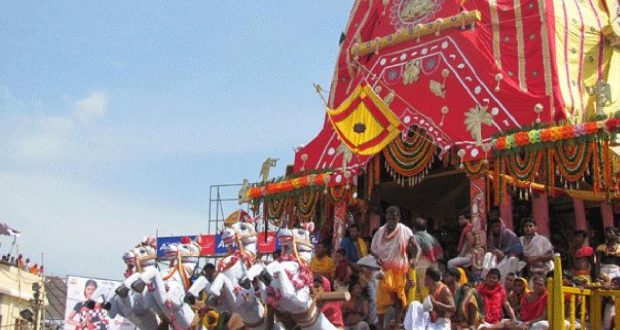 Puri :15/7/18; The ‘Nandighosh’ chariot of Lord Jagannath, which had to be halted near Balagandi Chhak during Ratha Yatra yesterday, reached Gundicha temple here today.

The journey of Lord Jagannath’s chariot could not be completed yesterday as the chariots are not pulled after sunset, as per tradition.

The pulling of Lord Jagannath’s chariot by the devotees resumed this morning after completion of rituals of the deity on the chariot.

All the three chariots are now positioned before the Gundicha temple.

The deities will stay at Gundicha temple for a week during the nine-day Ratha Yatra festival. The devotees can have darshan of the deities atop the chariots till tomorrow before they are taken to the Gundicha temple in a procession.

The police have made elaborate security arrangement around the