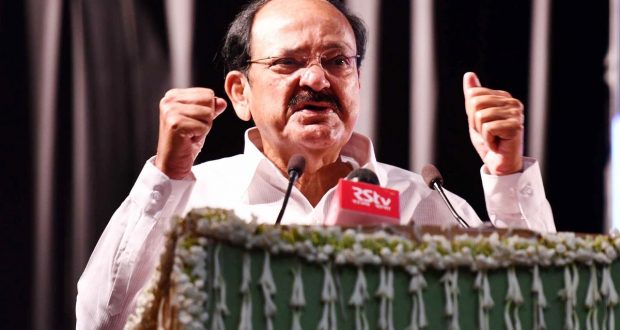 Language embodies culture, values, morals and traditional knowledge: Vice President All State Governments should make their respective mother tongues as a compulsory subject to teach in their Schools

in National July 15, 2018 Comments Off on Language embodies culture, values, morals and traditional knowledge: Vice President All State Governments should make their respective mother tongues as a compulsory subject to teach in their Schools 853 Views

Newdelhi:15/7/18:The Vice President of India, Shri M. Venkaiah Naidu has said that language embodies the culture, values, morals and traditional knowledge. He was addressing the gathering at the Founder’s Day Celebrations of Andhra Education Society and also at the Virtual-Inauguration of New School Building at Andhra Education Society School of R.K. Puram, here today. The Mayor of South Delhi, Shri Narendra Chawla and other dignitaries were present on the occasion.

The Vice President said that we are the inheritors of great culture and heritage and respecting elders and teachers; empathy for all living creatures and reverence for nature is in the DNA of every Indian. Stressing importance of the language, the Vice President said that one can learn as many languages as one can, but never neglect their mother tongue. That is why preservation of language is essential to conserve the broader cultural aspects of a civilization, he added.

The Vice President said that culture of a region represents its civilization, ethos, wisdom, morals, customs and social norms. Mutual understanding and respect for each other’s culture and learning the other Indian languages will strengthen the unity and integrity of India, he added.

The Vice President appealed for all State Governments to make their respective mother tongues as a compulsory subject to teach in their Schools.

Hailing the achievements of the Dr. Durga Bhai Deshmukh in pioneering women education, the Vice President said that recollecting the memories of great souls will inspire the younger generation to work for the development of the country. He further said that she was an inspiration for every one as a freedom fighter, lawyer, social worker, educationist and politician. It is a great tribute for her to celebrate her Birth Anniversary as the Founder’s Day of Andhra Education Society, he added.

The Vice President said that Dr. Durgabai Deshmukh was instrumental in setting up of many hospitals, colleges, nursing homes and vocational centers for women. She recognized the importance of education for women to overcome many problems, he added.

The Vice President said that she was a member of the Constituent Assembly, a member of Planning Commission, a founding president of the Central Social Welfare Board, and her contribution to the Delhi Blind Relief Association is always remembered.

2018-07-15
Editor in chief
Previous: MCA has constituted a 10-Member Committee to review the offences under the Companies Act, 2013
Next: ‘ Dakshina’ Collection Triggers Tension At Puri Gundicha Temple