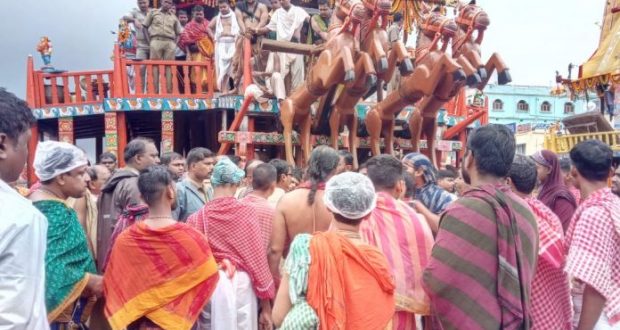 Puri:15/7/18; The collection of dakshina (monetary offering) from devotees by servitors near the cordoned area of the three chariots of Lord Jagannath, Lord Balabhadra and Devi Subhadra has sparked off a fresh controversy in the wake of Supreme Court’s embargo on donation collection.

As reports of donation collection came to light, the temple security personnel intervened warning the servitors of legal action for apex court order. This sparked off tension with the striking servitors staging sit-in in front of Gundicha temple and gheraooing the chief temple administrator Pradipta Mohapatra. The agitation by servitors put brakes on the rituals of the deities for more than an hour.

Later police rushed to the site to rescue the chief temple administration from the unruly servitors, officials said.

Meanwhile the rituals of the deities commenced after an hour-long deadlock. The administration has convened a meeting to sort out the points of differences.

In the wake of Supreme Court’s suggestion for reforms in the Jagannath temple that includes bar on dakshina collection, the administration of the Jagannath temple has installed 12 official donation collection boxes (hundis) near the chariots. The powerful servitor community has earlier expressed their strong displeasure over the hundi installation.