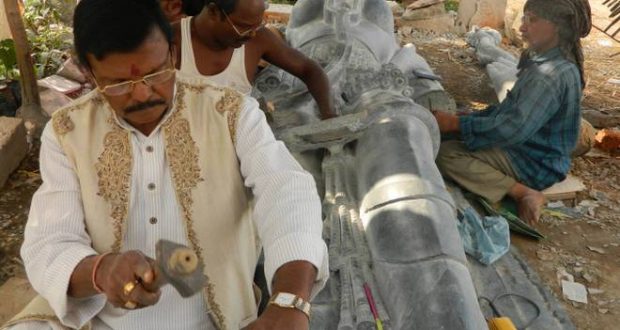 in National July 14, 2018 Comments Off on Renowned architect and sculptor from Odisha Raghunath Mohapatra has been nominated to the Rajya Sabha 1,473 Views

New Delhi: 14/7/18;Four new members have been nominated for the Rajya Sabha. In which names of RSS thinker Rakesh Sinha, farmer leader Ram Shakal, sculptor Raghunath Mahapatra and classical dancer Sonal Mansingh are named. These four have been nominated by President Ramnath Kovind.For the first time in the annals of political history president of india has nominated an eminent sculptor of odisha.

In fact, there were four seats vacant in the 245-member Rajya Sabha, which was to be nominated by the President. Now on the recommendation of the Central Government, President Ramnath Kovind has nominated these members for Rajya Sabha membership.

Practicing since 1959, he has trained over 2000 students. He has contributed to the preservation of traditional sculpture and ancient monuments. His famous works include a 6 feet high statue of the Sun God carved in grey sandstone, in the Central Hall of Parliament; and the Wooden Buddha, Buddha Temple, Paris.

She is the daughter-in-law of noted Odia poet Mayadhar Mansingh.

Rakesh Sinha is the Founder and Honorary Director of the Delhi-based think-tank “India Policy Foundation.” He is a regular columnist in a range of newspapers.

Ram Shakal is a farmer leader. he is widely respected for championing the cause of farmers, labourers and migrants.

2018-07-14
Editor in chief
Previous: President of India inaugurated the platinum jubilee celebrations of the Institute of Cost Accountants of India
Next: Odisha PCC Coordination Committee approved by Rahul Gandhi