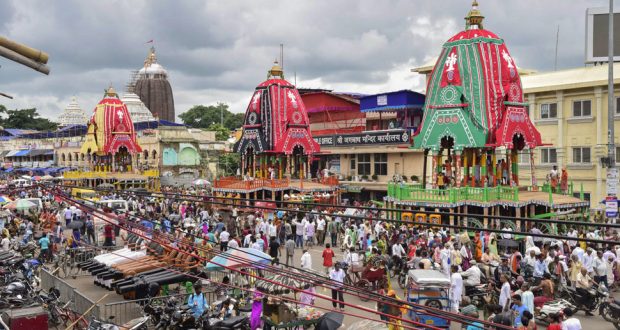 Over 10 lakh devotees from all across the country have thronged in Puri braving the rain, for the world famous Rath Yatra of Lord Jagannath, on Saturday.

Rath Yatra (chariot festival) is the celebration marking the annual journey of the three deities from the 12th century. The yatra is a nine-day-long celebration which will end with the Bahuda Yatra.

On this day Lord Jagannath and his two siblings, Balaram and Subhadra, visit their aunt at the Gundicha Temple around three kilometres away.

Meanwhile, the security in the region has been tightened to tackle any untoward incident.

Senior officials in Odisha have said elaborate security arrangements have been made for the festival to go on smoothly. The railway police have increased vigil at Puri and Bhubaneswar railway stations, 120 CCTV cameras have been installed at sensitive locations and the Coast Guard has stepped up sea patrolling off the coast of Puri.

NSG commandos and 140 platoons of police force have been deployed all along the route where devotees have lined up to pull the chariot.