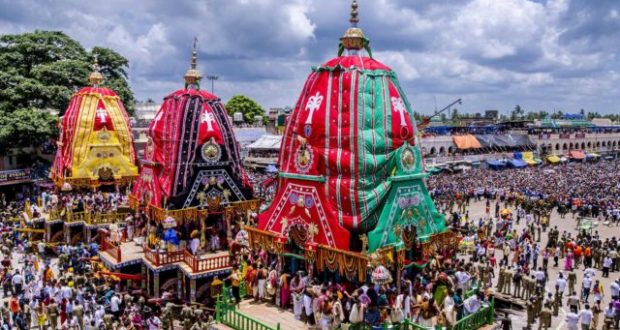 Puri:13/7/18; The Bada Danda in Odisha’s Puri is all set to witness the grand Ratha Jatra of Lord Jagannath and his siblings on July 14.

Necessary arrangements have been made by the district administration and police to ensure smooth conduct of the festival. After arrival of Agyan Mala, the chariots were today taken near Singha Dwara, from where the Rathas will begin their journey with the deities towards the Gundicha Temple here tomorrow.

The nine-day festival will begin on July 14 and it is expected that lakhs of devotees would congregate in the pilgrim town to witness the chariot festival.

As many as 140 platoons of police force and 1,000 officers will be deployed during the fest. The police officers have been instructed to keep a strict vigil on the visitors in all hotels in Puri while adequate security personnel would be deployed along the coast.

Besides, two units of Rapid Action Force and Odisha Swift Action Force will be deployed to avoid any untoward incident.