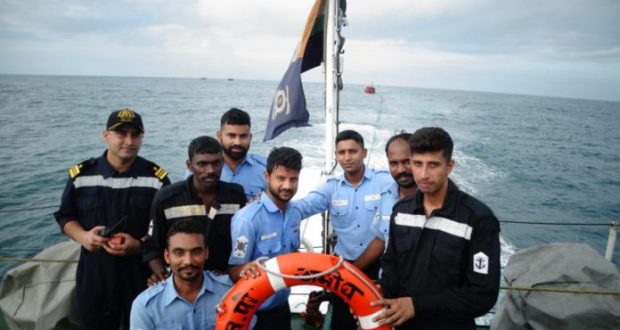 Ganjam:13/7/18 ;In a swift search and rescue mission, ten seagoing fishermen who were stranded mid-sea for over 48 hours were rescued and brought to safety by coast guard personnel.

The fishing vessel- Jagyan Nrusingha – carrying the fishermen drifted along the seawaters after it developed technical snag and lost its sailing capacity. Ganjam district fisheries officials informed us regarding the missing crews. The search and rescue operation was immediately undertaken. The coast guard Dornier aircraft was deployed in the mission. Besides Coast Guard Patrol ship Amogh was diverted towards the mission. The missing crews and the ill-fated vessel were sighted at about 20 nautical miles nautical miles off Puri coast, B. Nath Mahato, Commandant Paradip Coast Guard.

The fishing vessel was drifting on the seawaters without direction. As the seawater was unsteady and wavering, the fishing vessel had failed to negotiate the rough sea condition. The windy weather had also made the things worse for the vessel’s crews, said CG official.

After the rescue act, the vessel and its crewmembers were towed back safely to Puri, he added.

2018-07-13
Editor in chief
Previous: PresidentKovind with the Vice Chancellors, Directors and Heads of Central Institutes of Higher Learning, at Rashtrapati Bhavan, in New Delhi
Next: President &PMhave applauded Hima Das, who recently became the first Indian woman to win gold at IAAF World U-20 Athletics Championships