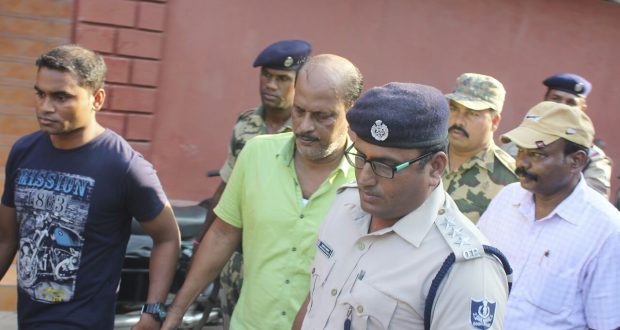 kendrapada:11/7/18; Tightening its noose on gangster Tito, the Special Task Force (STF) wing of state police is learnt to have initiated steps to bring the law-breaker under the scanner of enforcement directorate and stringent provisions of money laundering act.

The recent raid on gangster Tito’s house has brought in its wake a disturbing trend. The gangster now under STF remand is learnt to have accumulated huge quantum of movable and immovable assets.

Notorious gangster Seikh Usman Ali alias Tito was injured on June 30 in an encounter with the Special Task Force (STF) of state police near Chandikhole in Jajpur district.

“We have made a seizure of various incriminating documents that lend credence to the belief that the arrested gangster accumulated huge assets. The legitimacy of wealth accumulated is being investigated.

Sources of income and the accumulated wealth is apparently disproportionate”, said a STF official.

The investigation is still underway. Tito was taken on four day remand following his arrest on June 30. We have taken him again four day remand. We are hopeful of eliciting further clues both on criminal activities and wealth accumulation. His alleged with crime mongers from Hyderabad and Calcutta is also being investigated, confided the officials.

Everything right from the details of bank accounts and savings certificates to records of immovable assets are being verified. Benami property angle is also being looked into. In all likelihood, it may into several crores of rupees, the official added.

We are compiling a comprehensive report on ill-gotten wealth amassed by crime-monger. The enforcement directorate of union government would be apprised of it shortly with a suggestion of confiscation of ill-gotten property besides initiation of legal proceedings under Prevention of Money Laundering Act, 2005, he maintained.

The Prevention of Money Laundering Act (PMLA) provides for the freezing, seizure and confiscation of the proceeds of crime.

Before the gangster graduated to bigger crimes, Tito thrived on petty crimes. He hailed from poor economic background with large family of nine brothers and sisters. His first recorded crime dated back to 1989 when he was booked for arson. He had assaulted people during the course of an exhibition football match. His stay in jail spurred him to make foray into crime world. The criminals lodged then at the jail guided him to break law and earn fast buck. Since then, he did not look back. Initially he dabbled in extortion and highway robbery.

Later he constituted his own gang of criminals by recruiting unemployed and unlettered youths from minority community into his gang, said a retired police official of Kendrapara who had earlier arrested the gangster.

Alleged political patronage also emboldened the gangster to expand his network to tender-fixing of government civil construction works. There are past instances of Tito-led gang being engaged by parties in booth capturing and rigging in polls. Most recently, the younger brother of the gangster had joined BJD fold, the official said.

2018-07-11
Editor in chief
Previous: Make people active agents of transforming India: Vice President tells IAS officers
Next: Odisha and Bihar Police have arrested two members of a gang involved in the robbery of a state-owned bank