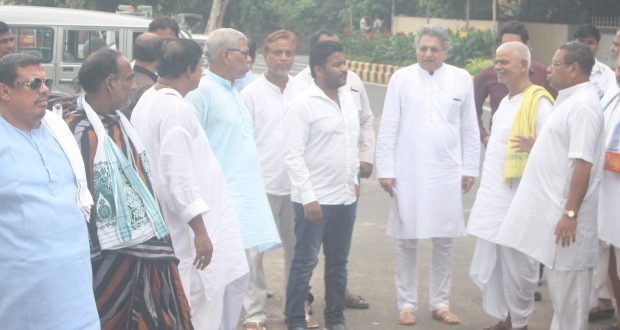 Bhubaneswar:8/7/18; Visibly upset over the apex court’s proposal in bringing about reforms in Puri Jagannath temple, a delegation of servitors of the Chhatisha Nijog today met Chief Minister Naveen Patnatik at Naveen Niwas.

The Chhatisha Niyog delegates apprised him of their concern over the proposed abolition of the practice of hereditary services of the servitors and the entry of non-Hindus into the temple. The proposal of the apex court on the abolition of the practice of hereditary services will be a blow to the sevayats community. The entry of non-Hindus will affect the sanctity of the 12thcentury old temple, said Rama Chandra Singhari, who headed the delegation.

It may be recalled here that the Puri district judge and sessions judge empowered by the apex court to suggest measures for setting right the mismanagement in Puri Jagannath temple had earlier recommended the abolition of hereditary ‘Seva’ rights of the lord by servitors.

The hereditary practice need to be put to an end and servitors should be appointed, the district judge Ambuj Mohan Das in a report submitted to the apex court stated.

The apex court earlier acting on a public interest litigation had ruled that “the temple managing committee has to ensure that servitors do not accept any donations. Instead ‘hundi’ (donation boxes) should be used for collecting donations, which will be utilised for the benefit of the 12th century shrine”.