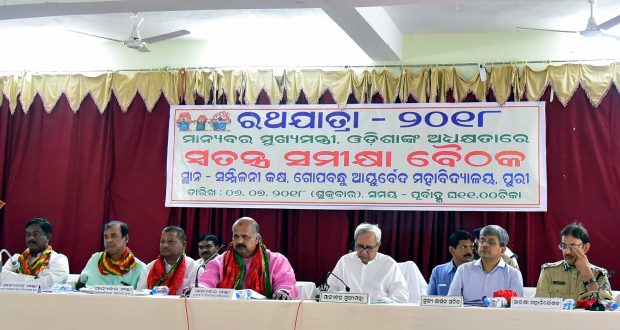 Puri:6/7/18; Chief Minister Naveen Patnaik today held a meeting to review arrangements for the Rath Jatra of Lord Jagannath to be held on July 14 and sought cooperation of all stake holders including the servitors for a smooth conduct of the annual festival.

Though the servitors of Shree Jagannath Temple had earlier decided to boycott Patnaik’s meeting, they later changed their mind and participated in the discussion.

“I have just reviewed the Rath Jatra arrangements. With the Lord’s blessings everything will go well and safe way. I sought cooperation of all for a smooth Rath Jatra,” Patnaik told reporters after the fourth Rath Jatra Coordination Committee meeting.

Usually four Coordination Committee meetings are held every year ahead of the Rath Jatra. The fourth and final meeting is chaired by the chief minister for taking stock of the preparedness for the annual festival.

The meeting was earlier scheduled to be held on July 3 but amidst a boycott call by servitors, it was postponed to today.

Shree Jagannath Sevayat Sammilani, a body of the servitors, appealed to its members on Sunday not to attend the July 3 meeting to protest the alleged attempt to defame them by the Puri district collector.

They, however, attended today’s meeting and submitted a memorandum to the chief minister seeking his intervention into various issues affecting them.

“We decided to attend the chief minister’s meeting as it is held for the Lord’s Rath Jatra. We have no intention to create disturbance during the festival,” said a senior servitor.

On the law and order situation, DGP R P Sharma said at least 135 platoons of police force will be deployed for the Rath Jatra, besides 800 police officers to ensure safety in and outside the Puri temple.

While 163 doctors and 350 health workers will be deployed in Puri for the festival, 200 public health stand posts, 760 tube wells and 35 water tankers will be at the service of the devotees.

The railway authorities have assured the coordination meeting that as many as 186 special trains will run to Puri from various stations across the country.

Patnaik asked the energy department to ensure uninterrupted power supply to the holy town during the festival.

2018-07-07
Editor in chief
Previous: Orphan girl has finally got the warmth of parental love and care with an US couple
Next: Odisha Guv’s air travel bill row has stirred up a hornet’s nest in political circles