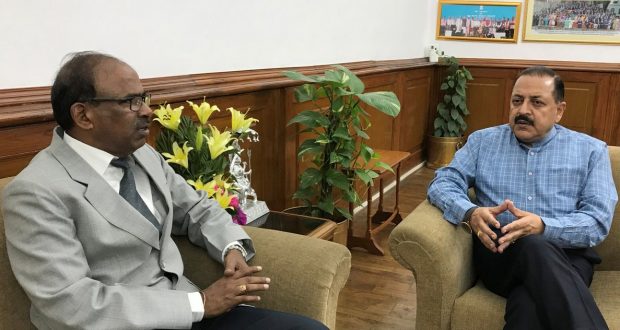 Newdelhi:5/7/18;Justice L Narsimha Reddy, who has taken over as the new Chairman of Central Administrative Tribunal (CAT), called on Union Minister of State (Independent Charge) for Development of North Eastern Region (DoNER), MoS PMO, Personnel, Public Grievances & Pensions, Atomic Energy and Space, Dr Jitendra Singh here today and discussed a wide range of issues related to the functioning of CAT as well as appointments to existing vacancies in the tribunal.

Dr Jitendra Singh expressed the hope that Justice Narsimha Reddy, who has a long experience of being a Judge in one of the leading High Courts of India, namely the Hyderabad High Court, and has also served on the Patna High Court, will be able to enrich the functioning and efficiency of CAT through his vast experience and commitment.

Describing CAT as an important organ in Government of  India, Dr Jitendra Singh said that the CAT was constituted in 1985 and the motivation behind setting it up was that officers and employees working in the Government would have an easier option to register their issues, including grievances and disputes, and will be able to seek redressal without having to run from one court of law to the other. He said, the Government is aware of the immediate need to fill up the vacant posts in different benches of CAT across the country and said due process has already been set in motion for this purpose.

Justice Narsimha Reddy, after his meeting with the Union Minister, said that the priority before him is to clear off the pendency of the cases. He said, he will try his best to live up to the objective of getting justice for all the officials and members serving in administration, to the best of their satisfaction.

2018-07-05
Editor in chief
Previous: Union Home Minister reviews the situation in J&K with Governor and top officials
Next: Odisha government has sought a clarification over the use of aircraft and helicopter by the Governor