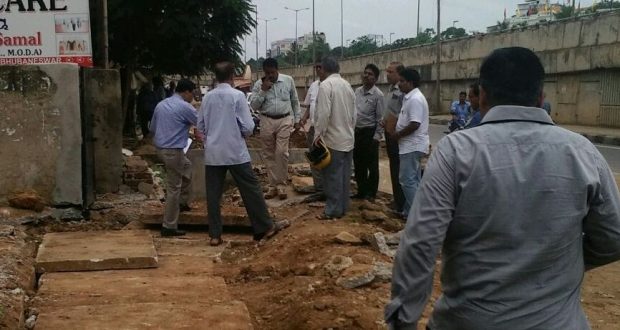 Bhubaneswar:5/7/18; On the second of the field enquiry by the joint squad of Bhubaneswar Development Authority (BDA) and Bhubaneswar Municipal Corporation (BMC), the team has come across at least three obstructions along the second drain, which originates after the siphon in front of Krishna Tower, opposite ISKCON Temple in Nayapalli and passes through Behera Sahi.

Yesterday, the special joint squad removed encroachment, made the depth of the siphon more by employing excavators and removing debris from the second drain, which was blocked by putting debris and soil by nearby residents and developers of multi-storeyed structures.

In case of heavy rains, while the water level on the service road is increasing with the additional water coming from the flyover_ just like opening up of streams on a hill slope_ on the Nayapalli side, the non-clearance of drain water beyond the siphon on the Behera Sahi-end, was adding to the problem as the water level was not receding near the ISKCON Temple, with the net inflow becoming more than the net outflow in the system.

2018-07-05
Editor in chief
Previous: Odisha government has sought a clarification over the use of aircraft and helicopter by the Governor
Next: Biswajit Mahapatra mesmerize judges in new season of Indian Idol