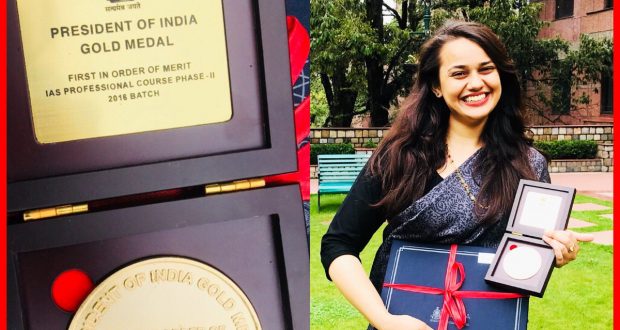 Tina, who had secured the first rank in UPSC’s civil services examination in 2015, continuing her fantastic streak, has now won the prestigious President’s Gold Medal during her two-year training program at LBSNAA.

Tina took to Twitter and wrote, ” *RANK 1* Once Again.I have received President of India Gold Medal for coming First in my 2 years of Training. I am *First in Order of Merit* of 2016 Batch of IAS.”

Tina turned a social media sensation announcing his marriage with her Kashmiri batch-mate Amir Athar Amirul Shafi Khan, who secured the second rank in the prestigious examination the same year.

She had created quite a furore with some of the right wing organisations raising questions over her decision to tie the knot with a person from another religion.

2018-07-01
Editor in chief
Previous: Odisha has recorded a 21 percent increase in revenue
Next: Tokata Fasigala going to be released on July,13,2018