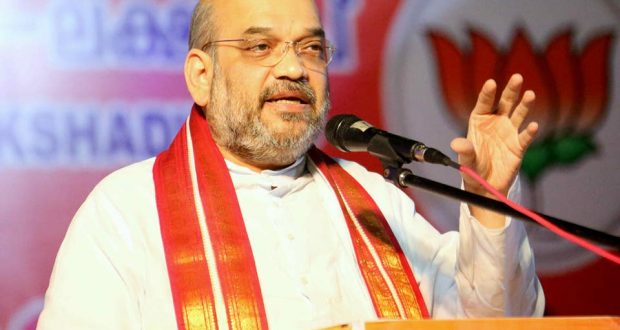 in State News July 1, 2018 Comments Off on BJP President Amit Shah set a target for the party to win at least 120 Assembly seats in Odisha 743 Views

Bhubaneswar :1/7/18; BJP President Amit Shah, who has set a target for the party to win at least 120 of the 147 Assembly seats in Odisha, kicked off closed-door meetings with the state leaders here today to fine-tune poll strategies, a senior leader of the saffron party said.

On his arrival at the Biju Patnaik International Airport here, Shah was accorded a warm welcome by senior leaders, including Union ministers Dharmendra Pradhan and Jual Oram, and the party’s state unit chief Basant Panda.

With less than a year left for the Odisha Assembly polls and the Lok Sabha elections, the BJP chief’s visit has “spurred enthusiasm” among the party workers, who are gearing up to cross swords with the ruling BJD, which has been in power in Odisha since 2000, the leader said.

“The visit is more significant as the BJP president has set a target for the party to win at least 120 out of the 147 seats in the next Assembly polls. We are working wholeheartedly to translate his dream into reality,” he said.

During his discussion with state party leaders and office-bearers, Shah will review the benefits doled out under various central schemes. He will also ascertain whether any central scheme is yet to reach the grassroots level in Odisha, Mohanty said.

As part of his brain-storming sessions, Shah is slated to hold a meeting with two leaders from each of the panchayats in the 21 Assembly segments under the Bhubaneswar, Puri and Cuttack Lok Sabha constituencies, he said.

Shah, who had last year launched a booth contact programme — ‘Mo Booth Sabuthu Majbhoot’ (My booth is the strongest one) — in Odisha, assigned the state party leaders with the task of ensuring door-to-door visit by booth workers to inform people about the pro-poor initiatives and welfare measures undertaken by the BJP-led NDA government.

His Odisha visit, which is seen as a part of BJP’s ‘look east’ policy, comes in the midst of a war of words between his party and the ruling BJD over the state government’s rejection of the Centre’s Ayushman Bharat scheme.

2018-07-01
Editor in chief
Previous: People commuting after dark on the road in smart city will face no more inconvenience
Next: Odisha has recorded a 21 percent increase in revenue