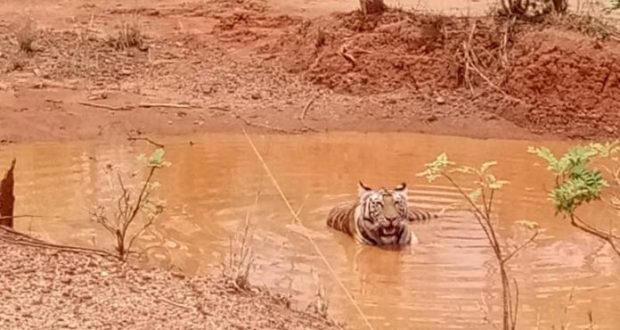 in District Diary June 29, 2018 Comments Off on Tigress called ‘Sundri’ feasted on a wild boar and has been found in jolly mood 1,084 Views

Angul:29/6/18; A two-year-old Royal Bengal tigress which was trans-located from Madhya Pradesh to Satkosia Tiger Reserve in Odisha’s in Angul district on Thursday, is steadily adapting to the alien environs, official sources said.

The tigress called ‘Sundri’ feasted on a wild boar and has been found in jolly mood. Though fatigued following 700 km-long road journey, the tigress is slowly getting accustomed to the new habitat.

‘Sundri’ is set to join a three-year-old tiger in Odisha’s Satkosia Sanctuary.

The tiger, too, was moved to the Satkosia enclosure from Kanha National Park in Madhya Pradesh on June 21, and it is now in a special enclosure at the tiger reserve.

According to forest officials, the tigress was tranquilised and brought to Odisha in a special vehicle.

Forest officials of Odisha and Madhya Pradesh along with experts from Wildlife Institute of India (WII) accompanied the tigress during the 700-km journey, they said.