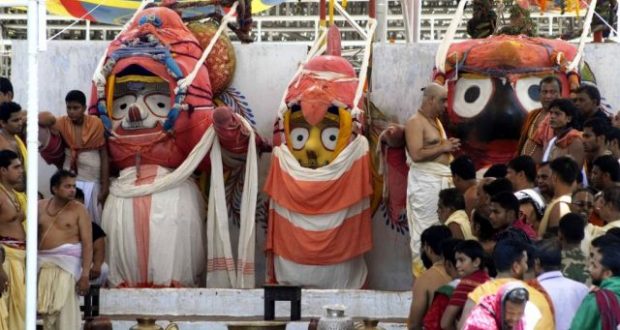 in District Diary June 28, 2018 Comments Off on Lakhs of devotee thronged Puri to witness holy bath of deities on Snana Purnima 754 Views

Puri:28/6/18; A sea of humanity today thronged Odisha’s pilgrim town of Puri to witness the holy bath of the idols of Lord Jagannath, Lord Balabhadra and Devi Subhadra along with Sudarshan on Snana Mandap (bathing pandal) of the Srimandir here on the sacred occasion of Deva Snana Purnima.

In the morning, the idols were brought out from Ratna Bedi (inner sanctum of the temple) to the Snana Mandap by the temple servitors in Pahandi, a traditional procession

As per rituals, the deities were accorded a bath with 108 pitchers of aromatic water by a group of servitors. While the servitors poured 35 pots of water on Lord Jagannath, Lord Balabhadra had shower with 33 pots of water, Devi Subhadra with 22 pots of water and Lord Sudarshan took bath with 18 pots of water.

It was followed by Chherapahanra (ceremonial sweeping) by Gajapati Dibyasingha Deb and Hati Besha or Gajanana Besa (elephant attire) of the lords.

After the ritualistic bath, it is believed that the deities suffer from cold and fever. The idols are then kept away from public view for fifteen days at Anansara Ghara for treatment for which specific rituals are performed. This period of isolation is called Anasara, which means improper time for worship.

The devotees will not get darshan of the lords in the temple for a period of 15 days and all the daily rituals of the temple remain suspended during the period.

On the 16th day, the idols in their youthful forms become ready for public view. The first appearance of the deities after the bathing festival is called Netrotsaba or Naba Jaubana Darshan.

2018-06-28
Editor in chief
Previous: Odisha chief minister Congratulated Sarpanch of Lariapali Panchayaton being awarded as DrugAddiction Free Panchayat
Next: Agri Vikas 2018 the first-of-its-kind international convergence will be held in Bhubaneswar