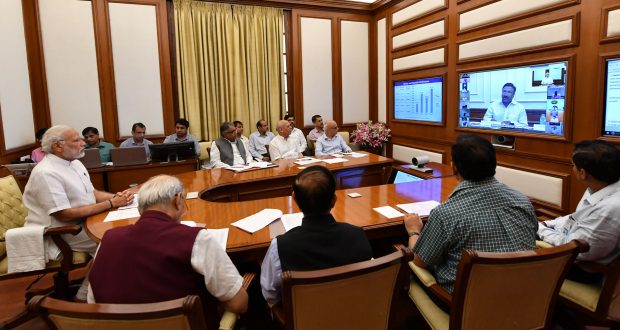 The 26 PRAGATI meetings so far have seen a cumulative review of projects with a total investment of over Rs. 11 lakh crore. Resolution of Public Grievances has also been reviewed across a range of sectors.

The Prime Minister reviewed the progress in implementation of the scheme for establishment of new medical colleges attached with existing district/referral hospitals. Mentioning that the Union Government is taking many initiatives in the health sector, he called for expeditious upgradation of health infrastructure.

The Prime Minister said that the first phase of the Gram Swaraj Abhiyan, which ran from April 14th to May 5th 2018, had achieved great success in the implementation of seven key schemes of the Union Government in over 16,000 villages. He said that the second phase of Gram Swaraj Abhiyan is now underway in over 40,000 villages in the Aspirational Districts. He called upon all officers, both from the State Governments and Union Government, involved with this effort to work towards achieving the best possible outcomes in this context, by the 15th of August.

The Prime Minister appreciated the progress made so far under the Saubhagya Yojana, and said that all efforts must be made to complete the ambitious target of providing 4 crore families an electricity connection within the stipulated timeline.

2018-06-27
Editor in chief
Previous: Prof Sudip Kumar Chand took charge as the chairman of OJEE
Next: Freedom of religion is as important as freedom of rights:Nikki Haley