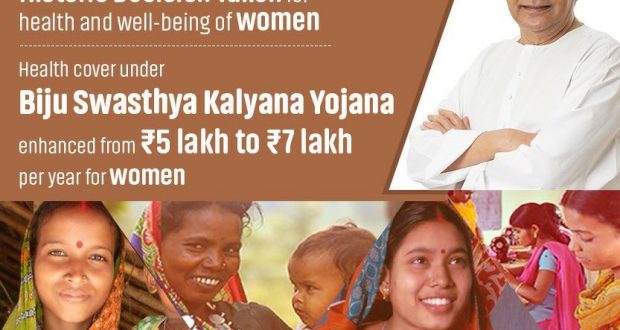 in State News June 27, 2018 Comments Off on Odisha Chief Minister increase the health cover for women from Rs 5 lakh to Rs 7 lakh 821 Views

He said that the historic initiative, which is a first in the country, will ensure adequate healthcare coverage for women in the state.

He said the State Government accords to priority to women and has launched various programmes from MAMATA, Mission Shakti and KHUSHI to providing them land rights and houses and cycles and hostels for girls. The increased health cover is a major step for health and well-being of women.

The Chief Minister made the announcement after Mamata Padiami of Kalimela area in Malkangiri district requested him to increase the health assistance for women under the BSKY during Ama Gaon Ama Bikash programme interaction session on Wednesday.

Naveen had held a meeting of Ama Gaon Ama Bikash programme through video conferencing at the State Secretariat here today.

During the meeting, the woman praised various women friendly initiatives taken by the Chief Minister and urged him to increase the health assistance for women under the BSKY as they are more prone to health problems.

“I know that medical expense is a huge burden for our poor people, following which we are launching Biju Swasthya Kalyana Yojana (BSKY) from August 15 (Independence Day). You will be able to get health cover up to Rs five lakh under this scheme. Around 3.5 crore people from over 70 lakh families in the State will be benefitted under the scheme,” Naveen said in a video release.