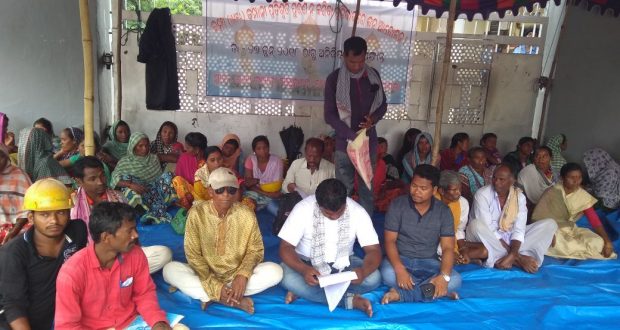 Rayagada:27/6/18; Local people including tribals of seven panchayats staged a demonstration in front of IMFA plant at Therubali in Rayagada district on Wednesday to press for their nine-point charter of demands.

The agitators locked the main gate of the plant at 8 am and staged a demonstration in front of it. They alleged that they had earlier withdrawn their agitation after the district administration assured them that their demands would be fulfilled, but no step has been taken in this regard so far.

The agitators threatened to continue their strike and intensify it if the district officials failed to take any step in this regard.

The agitators demanded regularisation of jobs of contractual employees of the plant, basic amenities, jobs for unemployed youths of the area in the company, among other demands.

During the protest, the agitators allegedly ransacked some prosperities of the plant including machinery, CCTV cameras and lights installed near the plant gate.

“Efforts are on to fulfill their demands,” said DK Mohanty, IMFA business head.