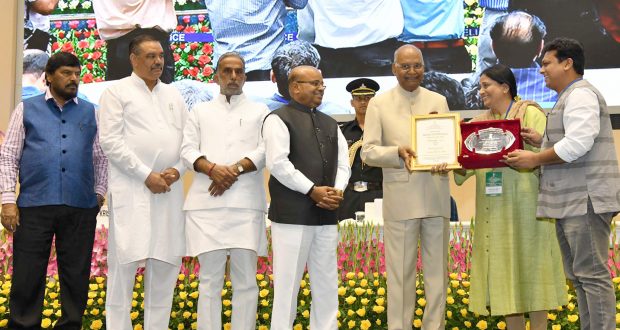 The President, Shri Ram Nath Kovind presenting the National Awards for Outstanding Services in the field of Prevention of Alcoholism and Substance (Drugs) Abuse, on the occasion of the International Day against Drug Abuse and Illicit Trafficking, in New Delhi on June 26, 2018. The Union Minister for Social Justice and Empowerment, Shri Thaawar Chand Gehlot, the Ministers of State for Social Justice & Empowerment, Shri Krishan Pal, Shri Vijay Sampla and Shri Ramdas Athawale are also seen.

in National June 26, 2018 Comments Off on President of India presents the National Awards for Outstanding Services in the field of Prevention of Alcoholism 613 Views

New Delhi:26/6/18; The President of India, Shri Ram Nath Kovind, presented the National Awards for Outstanding Services in the field of Prevention of Alcoholism and Substance (Drug) Abuse today (June 26, 2018) in New Delhi on the occasion of International Day against Drug Abuse and Illicit Trafficking.

Speaking on the occasion, the President said that problem of drugs addiction and alcoholism negatively impacts the individual, family and society in multiple domains such as health, culture, development and politics. Drug addiction spurs poverty and also poses a challenge to our national security as well as to our development and public welfare goals.

The President said that our geographical location between Myanmar-Laos-Thailand’s ‘Golden Triangle’ and Iran-Afghanistan-Pakistan’s ‘Golden Crescent’, makes the problem of Drug Abuse and Illicit Trafficking even more acute and complicated. Increase in drug trafficking and drug abuse in the border areas is also associated with issues of terrorism and political unrest. That is why there is a need to be more vigilant in Border States like Punjab and Manipur.

The President said that misuse of illegal drugs is creating health challenges especially for the young generation and school going children. He stated that the problem of drug abuse can be solved by awareness, prevention, incentives, and support efforts. In these efforts compassion and sympathy for the drug addicts is also necessary. Parents, teachers, doctors, voluntary organizations should be associated in the medical and rehabilitation efforts. He was happy to note that the Ministry of Social Justice and Empowerment has taken necessary steps in these directions.