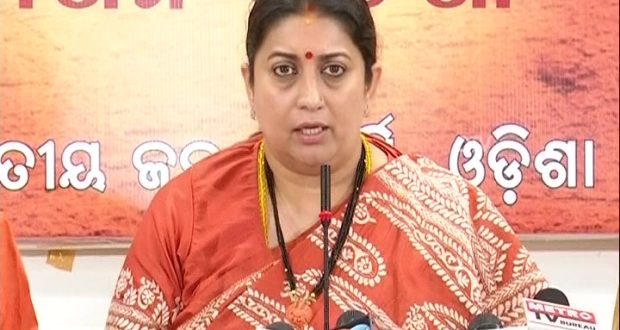 Leaders from Odisha for playing a crucial role in safe guarding democracy during the 1975 Emergency:Smriti Irani

in State News June 26, 2018 Comments Off on Leaders from Odisha for playing a crucial role in safe guarding democracy during the 1975 Emergency:Smriti Irani 718 Views

Bhubaneswar:26/6/18; As voices of dissent grew harsher among all parties on the occasion of 43 years of Emergency declared in India by the then Prime Minister Indira Gandhi, Union Textiles Minister Smriti Irani too targeted Congress and criticised such decision.

During her one-day visit to Odisha on Tuesday, Irani termed Emergency a ‘Black Day’ in the history of Indian democracy.

Besides, Irani also remembered the contributions of intellectuals, freedom fighters and leaders from Odisha for playing a crucial role in safe guarding democracy during the 1975 Emergency.

“I have come to pay tributes to 900 Satyagrahis and 300 MISA prisoners of Odisha for their sacrifices to protect democracy during the 1975 Emergency,” said Irani.

The Union Minister said that names like Harekrushna Mahatab, Biju Patnaik, Rabi Ray and other citizens are still not recorded in history but they fought hard for safeguarding democracy during such tough times.

“After 43 years of Emergency, people should remember it and it should be a day of pledge so that history is not repeated,” said Irani.

2018-06-26
Editor in chief
Previous: Puri MP Pinaki Mishra will attend the meeting of the Law Commission of India
Next: Smriti Zubin Irani emphasised for popularization of natural dyed products of Odisha Weavers