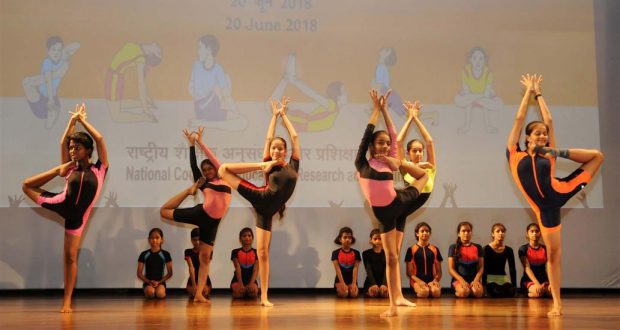 PM interacts with farmers across the country through video bridge

in National June 20, 2018 Comments Off on PM interacts with farmers across the country through video bridge 1,234 Views

Newdelhi:20/6/18;The Prime Minister, Shri Narendra Modi, today interacted with farmers across the country, through video bridge. Over 2 lakh Common Service Centres (CSC) and 600 Krishim Vigyan Kendras (KVK) were connected through the video dialogue. This is the seventh interaction in the series by the Prime Minister through video conference with various beneficiaries of Government schemes.

Expressing happiness in interacting with farmers from over 600 districts, Prime Minister said that farmers are the ‘Annadatas’ (food providers) of our nation. He said that the entire credit for nation’s food security should go to the farmers.

Outlining his vision for farmers overall welfare  in the country, Prime Minister said that government is working towards doubling the farmer’s income by 2022 and to provide farmers maximum price of their produce. He added that the effort is to ensure that farmers receive help during all steps of farming, from preparation of crops to its sales.He emphasized that Government is keenon ensuring minimal cost of raw material, providing fair value for the produce, stopping wastage of the produce and ensuring alternate sources of income for the farmers.

He said that the Government is committed that farmers should feel that from ‘Beej Se Bazaar’ (Seed to Market), how various initiatives helped the farmers to improve traditional farming.

Talking about the transformationof the farming sector, Shri Narendra Modi said that the agriculture sector has developed rapidly in the last 48 months. He added that there has been record production of milk, fruits and vegetables in the country during the period.
Government has also almost doubled the budget provision for agricultural sector (2014-2019) to Rs. 2,12,000crore compared to Rs. 1,21,000 during thepast five years of the previous government. Similarly, food grain production has increased to more than 279 million tonnes in 2017-2018 compared to average of 255 million tonnes during 2010-2014. The period also saw 26 % increase in fish farming due to Blue Revolution and 24% increase in Animal Husbandry and milk production.
Interacting with the famers’, Prime Minister said that to ensure the overall welfare of the farmer, government has provided Soil Health Cards;credit through Kisan Credit Cards; quality fertilizers through the provision ofNeem coated Urea, crop insurance through FasalBimaYojana and irrigation through Pradhan Mantri Krishi Sinchai Yojana. Under the PM Krishi Sinchai Yojana , about 100 irrigation projects are being completed across the country today and around 29 lakh hectare land has been brought under irrigation.
Government also started the e-NAM, an online platform, enabling farmers to sell their produce at the right price. In the past four years, more than 585 regulated wholesale markets have been brought under e-NAM.Government has also brought  nearly 22 lakh hectare land is under organic farming, compared to just 7 lakh hectares in 2013-2014. Government also plans to promote North-East as the hub of Organic Farming.
During the interaction, Prime Minister expressed delight in the collective strength displayed by the farmers through the formation ofFarmer Producer Group and FPO (Farmer Producer Organisation), enabling them to get agricultural inputs at  low cost and marketing their produce effectively.  In the past 4 years, 517 Farmer Producer Organizations have been created and income tax exemption has been granted to Farmer Producer Companies, to encourage cooperatives amongst farmers.
Interacting with the Prime Minister, beneficiaries of various agricultural schemes explained howvarious government schemes helped improve production. Beneficiariesalso highlighted the importance of Soil Health Card and shared their experiences of cooperative movement.

2018-06-20
Editor in chief
Previous: Four from odeisha has been selected for the coveted Sangeet Natak Akademi award
Next: Teachers of Government schools can now directly apply for National Teachers’ Award – Shri Prakash Javadekar