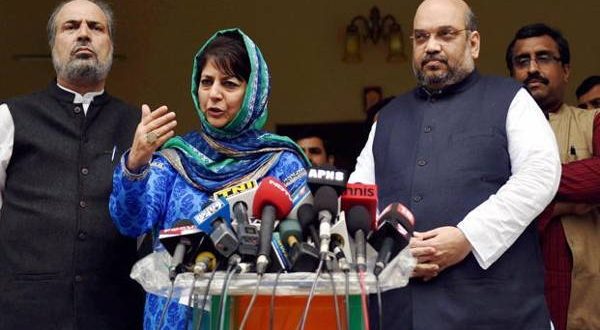 Jammu Kashmir:19/6/18;Putting an end to a three-year relationship, the Bharatiya Janata Party (BJP) pulled out of its alliance with Mehbooba Mufti’s People’s Democratic Party (PDP) on Tuesday.This move has come into fore after the Centre’s decision to discontinue the Ramzan ceasefire in Jammu and Kashmir.Speaking to the media, BJP general secretary Ram Madhav said that it is untenable for the party to continue in alliance with the PDP in the state, hence they are withdrawing support further blaming the government for the rise in violence in the Valley.He also cited the lack of development in Jammu and Ladakh. BJP president Amit Shah held a meeting with all the party lawmakers of the state in Delhi on Tuesday.BJP lawmakers in J&K welcomed the decision to pull out from the PDP alliance and also tendered their resignation to Jammu and Kashmir Chief Minister Mehbooba Mufti.Following the announcement, Mehbooba Mufti handed in her resignation paving the way for Governor’s Rule.

The state Assembly had 25 lawmakers in BJP, 28 of PDP, National Conference has 15, the Congress 12 and others 7 MLAs. For the last three years, BJP and the PDP, have had uneasy relations. However, things took a drastic turn after Union Home Minister Rajnath Singh lifted the ceasefire that the government had put in force during the month of Ramzan stating that anti-terror operations would resume in full force.Rising Kashmir editor Shujaat Bukhari’s killing pushed down the PDP’s hopes further of the ceasefire continuing in the Valley.