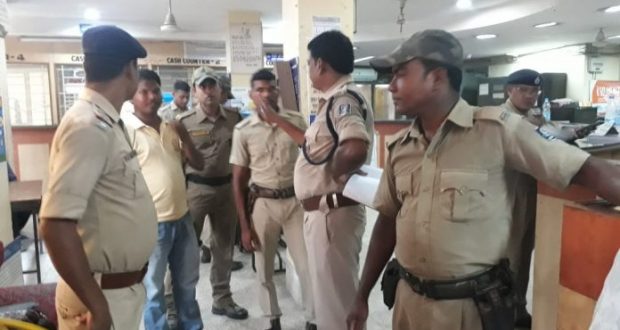 in District Diary June 19, 2018 Comments Off on Armed dacoits looted around Rs 42 lakh cash from the Indian Overseas Bank 796 Views

Police said as soon as the banked opened at 10 AM, the armed dacoits barged into the bank and executed the heist at gun point.

They beat up the bankers and locked up them in a chamber. Later they snatched away the keys of the strong room locker and looted the cash. Later they sped away on a motorbike and a car.

The dacoits who were talking in Hindi broke the CCTV and took away the hard disc of the computer.

Five to six miscreants had executed the crime. It was the handiwork of an interstate gang of bank dacoits. The criminals are believed to be from Jharkhand. The police counterparts in Jharkhand have been alerted.

A special squad has been constituted to nab the criminals, police said.

2018-06-19
Editor in chief
Previous: BJP-PDP alliance comes to an end in J&K, CM Mehbooba Mufti resigns
Next: Nearly 4 kilo metre stretch road In Lanjigarh being covered under the streetlight system by Vedanta