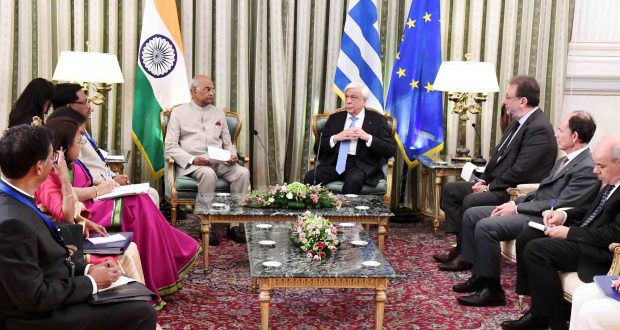 Greece:18/6/18:The President of India, Shri Ram Nath Kovind, who is on a State visit to Greece began his formal engagements today (June 18, 2018). He met his counterpart, PresidentProkopis Pavlopoulos at the Presidential Mansion where he was accorded a ceremonial welcome prior to the meeting.

During his meeting with the Greek President and the delegation level talks, President Kovind emphasized the age-old civilizational ties between the two nations. The President said that India and Greece shared values of democracy, rule of law and multi-cultural ethos, and these have added depth to our bilateral and multilateral engagements. The President expressed that India was keen to deepen the ongoing co-operation with Greece especially in political and economic fields.

He also apprised the Greek delegation of the steps taken by India to improve business climate in the country and said that India wished to collaborate with the Greek companies to become partners in the growth story of India. In particular, India could benefit from expertise of Greece in areas such as Shipping, Food and Dairy, and Tourism. On the other hand Indian companies especially in the areas of pharma, IT, agriculture, real estate, infrastructure and start-ups are keen to establish presence in Greece.

India also thanked Greece for its support for India’s candidature for a non-permanent seat in the UN Security Council and for membership to the Nuclear Suppliers Group.

On the subject of India-Greece cultural ties, the President said that as two ancient civilizations that have interacted with each other for centuries, we have a deep cultural understanding of each other. He also said that the two countries should work together to develop Greek and Indian traditional medicinal practices as healthcare options for people.

After the delegation level talks, the President also met the Prime Minister of Greece Mr Alexis Tsipras and the two leaders discussed different issues of mutual interest to both nations. Later, Mr Kyriakos Mitsotakis, the Leader of Opposition of the Hellenic Republic also called on the President.

During the day, three Memorandums of Understanding (MoUs) were signed- (i) the MoU between Bureau of Indian Standards (BIS) and National Quality Infrastructure System/Hellenic Organization for Standardization on Cooperation in the Fields of Standardization; (ii) MoU between Foreign Service Institute (FSI), India and Diplomatic Academy, Greece on Cooperation in Diplomatic Training and (iii) the Programme of Cultural Cooperation for the year 2018-2020.

Later in the evening, the President will lay a wreath at the Phaleron Indian Cremation Memorial where the remains of the 74 soldiers of undivided India who sacrificed their lives during World War II were laid to rest. The President will also attend a State Banquet hosted by the President of Greece.

2018-06-18
Editor in chief
Previous: GST leads to Formalization of Economy and Widening of Tax Base
Next: Odisha continued to sizzle under grueling Heat 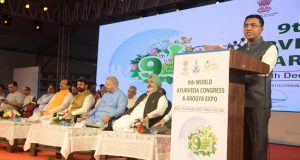