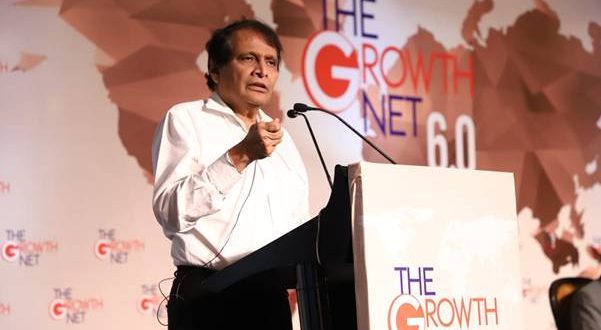 New Delhi :18/6/18;Services trade is growing faster than merchandise and such dynamic changes need to be captured in the global trading system, stated Suresh Prabhu, Minister of Commerce and Industry and Civil Aviation. He was speaking at the 6th Growth Net Summit, being held in New Delhi on 18-19 June 2018, organized by AnantaCenter and Confederation of Indian Industry (CII) with Smadja&Smadja.

The government is working on a comprehensive strategy to boost services exports and $1 billion will be spent to promote 12 champion services sectors. For the first time, a strategy of products in new markets is being developed. Exports are also being promoted in regions like Africa, Latin America and Central Asia, added the Minister.

Noting that the World Trade Organisation was created as part of a rules-based, multilateral, democratic and participatory institution for expanding global trade, he said that countries have recognized the value of global trade for fosteringgrowth and creating jobs. India is working with other countries to ensure that WTO remains relevant, he said.

2018-06-18
Editor in chief
Previous: Odisha Chief Minister reviewed the progress work at Kalinga Stadium for the Odisha Men’s Hockey World Cup 2018.
Next: GST leads to Formalization of Economy and Widening of Tax Base