in Education June 17, 2018 Comments Off on IIT Bhubaneswar organised an open house JEE counselling and interaction session for the IIT aspirants, 1,184 Views

Bhubaneswar:17/6/18: Indian Institute of Technology (IIT) Bhubaneswar on Sunday organised an open house JEE counselling and interaction session for the IIT aspirants, including those who are qualified in JEE 2018 (Advanced) and those who are going to appear in 2019.

IIT Bhubaneswar Director Prof. RV Rajakumar gave an in-depth presentation on IIT system including the 1st, 2nd and 3rd generation IITs, IIT education in general and about the rapid strides being made by IIT Bhubaneswar in education, research and infrastructure building.

This was followed by an introduction to programs of study by Prof. N. C. Sahoo and presentation on general procedures to be followed for admission and counselling at IITs by Chairman JEE, Dr. C. Bhamidipati.

The inclusion of supernumerary seats for female students from 2018 as per the policy of the Central Government, aimed at bring gender balance in the engineering education was highlighted. The girl students were also counselled by the JEE help desk team to fill as many choices as possible to maximize their chances of getting a seat in IITs. Various schemes of financial assistance (including Vidyalaxmi scheme introduced last year by MHRD, Govt. of India), to the admitted students were presented by the SBI Regional Manager, Mr. S Panigrahi. 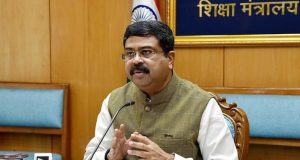 Ministry of Education has been allocated Rs 112899.47 crore, the highest allocation ever to the Education Ministry – Dharmendra Pradhan