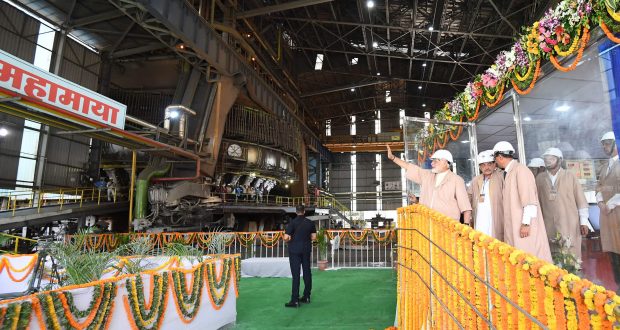 He later visited Blast Furnace-8 at the Bhilai Steel Plant, and was briefed on various aspects of the Plant. People lined the streets of Bhilai to greet the Prime Minister.

At a large public meeting, the Prime Minister dedicated the modernized and expanded Bhilai Steel Plant, to the nation. He laid the foundation stone for IIT Bhilai. He also unveiled a plaque to mark the commencement of phase-2 of BharatNet. The Prime Minister inaugurated air services between Jagdalpur and Raipur. He also distributed laptops, certificates and cheques etc. to beneficiaries under various schemes.

Addressing the gathering, the Prime Minister asserted that development is the best answer to all kinds of violence.

He said that the Bhilai Steel Plant has contributed in a big way to nation-building. He said the modernized and expanded plant would be instrumental in building a strong foundation for New India. He also spoke of the benefits that the other development projects launched today would bring about.

The Prime Minister said that in the last two months, the Gram Swaraj Abhiyan has had a very positive effect. He said that this Abhiyan (mission) is being pursued vigorously in the 115 Aspirational Districts, out of which 12 districts are in Chhattisgarh. He spoke of the benefit that schemes such as Jan Dhan Yojana, Mudra Yojana, Ujjwala Yojana, Fasal Bima Yojana and Saubhagya have brought about in the State.

Shri Narendra Modi said that keeping in mind the interests of the tribal population, the Forest Rights Act is being strictly implemented. He said the Government is working for the welfare of tribals, and Eklavya Vidyalayas are being established across the country.