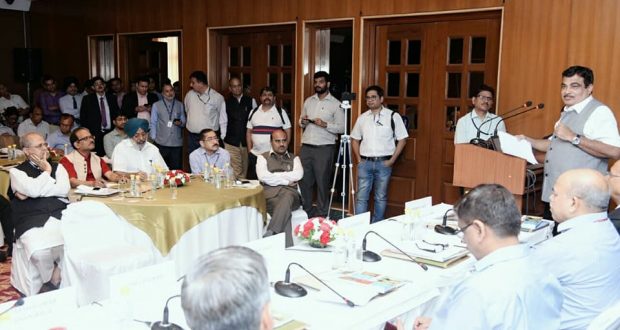 Newdelhi:14/6/18;Following a marathon, two day review of over 700 ongoing National Highways projects in the country, the Ministry of Road Transport & Highways has identified about 300 projects for completion by March 2019. Of these, about 100 projects are likely to be completed by December 2018.  Addressing media persons in New Delhi today, the Union Minister for Road Transport & Highways, Shipping, Water Resources, River Development and Ganga Rejuvenation Shri Nitin Gadkari informed that he, along with  MoS Shri Mansukh L Mandavia,  had held extensive, state-wise review of the ongoing highways projects of 20 states in Goa earlier this week. The meeting was attended by senior officials of the Ministry, NHAI (National Highways Authority of India) NHIDCL ( National Highways Infrastructure Development Corporation Ltd) , the PWD Secretaries of respective states , Project Directors, Regional Officers, every   Central and State  Government official associated with the project and also the concessionaires/ contractors.

Shri Gadkari informed that they reviewed about 427 projects of NHAI and 311 projects of NHIDCL and the Road Transport Ministry covering 20 states  over the two day period. 127 NHAI projects and 153 Ministry projects, which were  scheduled for completion by June 2019, have now been targeted for expedited completion by March 2019.   In addition, there are about 100 projects that are going to be completed by December 2018. The construction target of NHAI for the year 2018-19 has been  revised upwards from 5058 km to 6000 km , and the Minister expressed confidence that the organization would surpass this target. The Minister also informed that the projects of Maharashtra and the North Eastern states remain  to be reviewed, and the meeting for this will be held soon.

Delay in land acquisition and utility shifting, environment clearance and permission for cutting of trees have been identified as some of the main reasons for delay of highways projects. The Minister lauded the performance of states like Uttar Pradesh, Tamil Nadu, Maharashtra, Gujarat, Andhra Pradesh in sorting out these issues and helping expedite the highways projects. States like Bihar and Odisha on the other hand, need to greatly improve their performance in this regard, he said.

The Minister stressed upon the necessity  of  regular reviews and monitoring for removing the above problems and expediting projects across the country. He said that he has visited states like Uttar Pradesh, Uttarakhand, Bihar, Madhya Pradesh, Jharkhand, Goa, Karnataka, Kerala and Tamil Nadu recently and held extensive review meetings with concerned state and central officials to expedite projects in these states. Following  the Goa review meeting Chief Secretaries of all states have been asked to hold monthly review meetings to sort out problems at their ends. Secretary Road Transport & Highways will hold meetings with  Chief Secretaries of every state to sort out the encumbrances that are delaying the highways projects. CGMs of projects have been directed to visit sites every 10 days to see the progress on ground.

Faulty DPRs have been found to be another reason for delay. Very often Detailed Project Reports (DPR) are made without taking actual ground realities into consideration. It has been decided to compile a list of projects that have been delayed for this reason. The consultants making faulty DPRs will be penalized and black listed.

The Minister also stressed upon a performance audit of concessionaires. Good performers will be rewarded with incentives and poor performers may be black listed. Shri Gadkari also said that he will soon hold meetings with  the heads of major banks to sort out issues related to flow of funds.