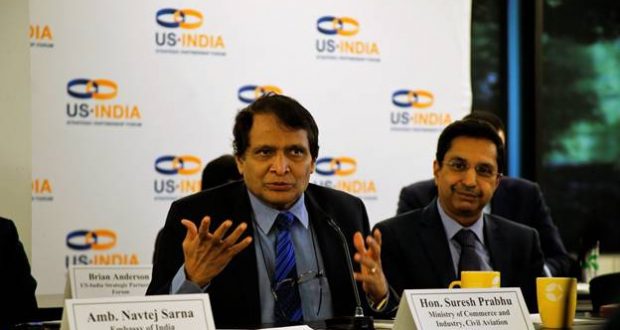 in National June 13, 2018 Comments Off on Discussions on bilateral trade and commercial relations during Suresh Prabhu’sUSA visit 659 Views

Newdelhi:13/6/18:Union Minister of Commerce & Industry and Civil Aviation, Suresh Prabhu visited USA on 10-12 June 2018. During his visit he held discussions with the US Trade Representative Robert E. Lighthizer, Secretary of Commerce Wilbur L. Ross and Secretary of Agriculture Sonny Perdue. He also had a joint meeting with the India Caucus Co-chairs Senator Mark Robert Warner and Senator John Cornyn. The meetings were held in a friendly and cordial atmosphere, with appreciation for each other’s points of view. Discussions centered around bilateral trade and commercial relations between the two countries and focused on finding the way forward to address concerns of both sides.

In this context, it was agreed that Indian and US officials would meet at a senior level at an early date to discuss various issues of interest to both sides and carry forward the discussions in a positive, constructive and result oriented manner.

During the visit, Suresh Prabhu also addressed business and industry leaders in meetings organized by US-India Business Council (USIBC) and US-India Strategic Partnership Forum (USISPF) and held meetings with other stakeholders. In these meetings, the Minister noted the encouraging growth in trade volumes through purchases of US-made civilian aircrafts by Indian companies and enhanced cooperation in the area of energy, including procurement of petroleum and LNG by India from the US. He also pointed out that India’s rapid economic growth will create significant new market opportunities in these and other areas and added that these purchases have already led to reduction in bilateral trade deficit in 2017. Future sales will sustain this trend and create a balanced trade relationship between the two countries.