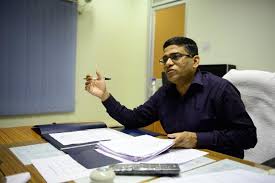 Mohapatra, a 1988-batch IAS officer, has replaced Pradeep Kumar Jena, who was in the eye of storm after news about the key of Ratna Bhandar (treasury) of Puri Jagannath temple went missing cropped up.

According to an official release, Mohapatra, currently serving as Principal Secretary of School and Mass Education Department, has been given additional charge of SJTA Chief.

The non-availability of keys of Ratna Bhandar had drawn flak, with Puri Shankaracharya Swami Nischalananda Saraswati of Govardhan Peeth having demanded a probe into the case.

At a meeting of the Sri Jagannath Temple Managing Committee on April 4, it was recorded that the keys of the inner chambers of the treasury had gone missing.

Notably, Chief Minister Naveen Patnaik, on Monday, had ordered a judicial probe into the circumstances leading to non-availability of the keys of Ratna Bhandar and asked to complete it within three months.

2018-06-12
Editor in chief
Previous: Odisha Crafts Museum has emerged as a treasure trove for handicrafts and handloom
Next: Union Home Minister exhorts BPR&D to train policemen in soft skills