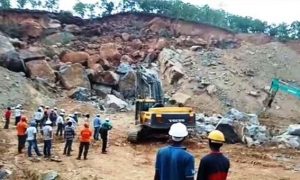 Koraput10/6/18:: Eleven days after two JCB operators got trapped under chunks of boulders at a stone quarry near Telengir Irrigation Project at Bariput in Koraput district, the body of one of them was recovered on Sunday.

According to sources, two JCB operators, identified as Ghanshyam Guru and Sanjay Dash of Deogarh district, were busy excavating boulders by JCBs at the stone quarry around 7 pm on May 31 when the quarry caved in.

A joint team of Odisha Disaster Rapid Action Force (ODRAF) and fire officials were engaged at the quarry operated by one DD Construction Limited to rescue the JCB operators, but failed in the mission. Subsequently, a team of National Disaster Response Force (NDRF) was also roped in, but in vain.

Later, the administration sought the help of Indian army. A team of army engineers from Ranchi conducted series of minor blasts at the quarry and managed to recover the one body on Sunday.

While one more JCB operator is still trapped in the quarry, the rescue operation is underway.