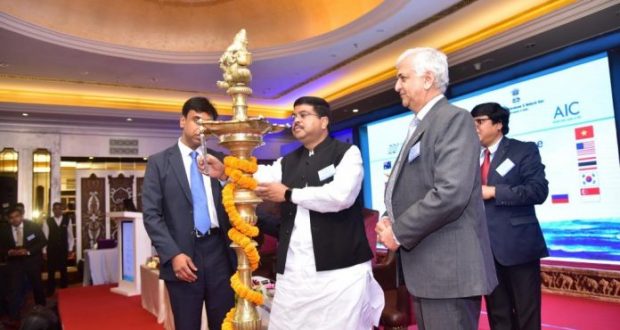 Bhubaneswar:9/6/18; The maritime safety and sea-route security aspects have under sharp focus with the Ministry of External Affairs organizing the 3rd East Asia Summit Conference at Bhubaneswar on 8th,June,2018

Speaking at the Inaugural session, the Minister referred to Prime Minister Modi’s Speech delivered at the Shangri La Dialogue at Singapore on June 1 and the Delhi Declaration of ASEAN India Commemorative Summit held in New Delhi on February 25, where maritime security and safety were identified as important areas of cooperation between India and the region.

Highlighting the importance of oceans and ocean resources, the Minister spoke about the importance of oceans for trade and thus the necessity of ensuring safety of maritime sea-lanes and cooperation among countries to keep the oceans free for navigation and unimpeded commerce. The Minister alluded to the fact that India is the closest maritime neighbour of South East Asia and enjoyed ancient maritime and cultural links with the region. He recalled the festival of Bali Yatra, which was a voyage to Bali, Indonesia that was undertaken during the ancient days by merchants and seafarers from Odisha. The Minister also highlighted the potential that Odisha has to become the maritime gateway to the region by virtue of many important ports and waterways in the state. Referring to Prime Minister Modi’s vision of SAGAR, which is Security And Growth for All in the Region, the Minister hoped that the conference will help elicit coherent views among EAS member countries on cooperation in areas of maritime security, maritime safety and use of ocean resources to the benefit of all.

The conference was attended by 52 delegates from 16 countries. The delegates will be taken on a heritage tour to Dhauli and Konark on 9th June in order to give them an exposure to the heritage and cultural sites of the state.

2018-06-09
Editor in chief
Previous: Odisha Government had signed MoU with Pullela Gopichand Badminton Foundation to set up a world-class Badminton Academy i
Next: Veteran journalist Prashant Mohanty passed away