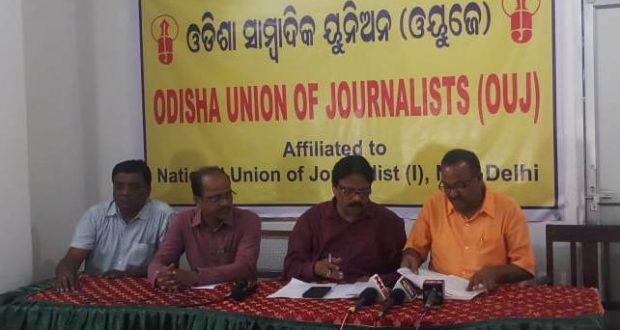 Bhubaneswar, 7/6/18;: Odisha Union of Journalists (OUJ) on Thursday hailed the flurry of welfare measures announced by the state government.

OUJ president Prasanna Kumar Mohanty, while addressing a press meet here, – said the recent announcement of Rs 2 lakh Gopabandhu Working Journalists Insurance Scheme and the rolling out of a few other benefits on Thursday were commendable steps taken by Chief Minister Naveen Patnaik.

“We express our sincere thanks and gratitude to Chief Minister Naveen Patnaik and Information and Public Relations minister Pratap Jena for rolling out a number of social security measures like death benefit of Rs lakh to the working journalists, top up financial assistance on the Rs 2 lakh health insurance scheme, 3 per cent interest subvention on purchase of four-wheelers and two wheelers, Rs 2 lakh assistance in case of permanent incapacitation, educational assistance the children of deceased journalists and training of working journalists by Indian Institute of Mass Communication,” said Mr Mohanty.

He urged the Chief Minister Naveen Patnaik and I&PR minister Pratap Jena to be a little more lenient to announce pension scheme for the journalists.

Besides, Mr Mohanty also demanded for enactment of Journalists Protections Act in the line of Maharashtra Government for providing security to the scribes against harassment and attack by various official and private agencies and individuals.