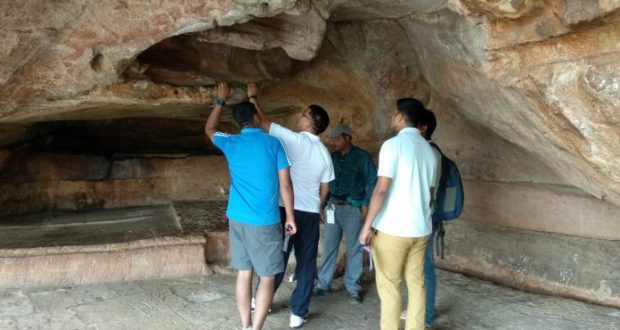 Bhubaneswar:2/06/18; Visitors from Visakhapatnam today took part in the 26th Monks, Caves and Kings heritage tour at Udayagiri and Khandagiri.

Guide Satyasundar Mishra described the role of rulers of the ancient kingdom and how they also contributed towards the propagation of the Jain religious movement. While atop the Udayagiri Hills participants also asked about nearby hills around the Twin Hills and the guide explained how both Jainism and Buddhism peacefully existed till there were some friction and a change in the socio-political system in the region.

Tourist Vijay Balram, who came from Visakhapatnam, said “the tour makes a difference by telling the historic facts through simple stories narrating all the characters from the pages of history. I had visited the site before, but today’s experience was unique.’’

Guide Satyasundar Mishra added that it was Emperor Kharavel, who had created a special Kalingan identity for the people of the region and was having around 40 percent of the landmass of the Indian sub-continent under his rule. Kharvel was also the only ruler in the history, who motivated the people and won war against the mighty Magadhan army.

Earlier, Magadha ruler Emperor Ashoka attacked Kalinga in 261 BC and interestingly, after the terrible war the emperor became a completely transformed individual. It would be pertinent to mention here that the war, which was fought near the foothills of Dhauli Hill, changed the Magadha ruler from “Chandashoka’’ to “Dharmashoka’’.

The Monks, Caves and Kings heritage tour is under the umbrella of Ekamra Walks, which is the city-based tour framework for the heritage city, which was once known as Ekamra Kshetra, an abode of Lord Shiva and Devi Parvati. While Ekamra Walks Old Town Circuit starts at 6.30 am every Sunday from 10th Century Mukteswar Temple, the Monks, Caves and Kings starts at the same time from Udayagiri at the Twin Hills.