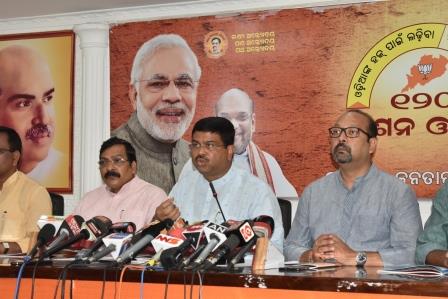 The stand of Odisha unit of BJP is clear and there will be no compromise with the interests of Odisha with respect to Mahanadi water sharing,” said Pradhan.

Raman Singh had said that a major part of the catchment of Mahanadi river is in Chhattisgarh and the state has exclusive right over its water.

“Chattisgarh did a mistake. Even Union Minister Sanjeev Balyan had criticised Chattisgarh Government in the floor of the House,” said Dharmendra.

“I admit that Chhattisgarh has committed wrong. The tribunal constituted to resolve the water sharing issue will decide on this. But, the inter-state disputes should be resolved through discussion,” said Pradhan.

The BJP leader, however, attacked the Odisha government for not taking any step for tapping the water in the catchment areas of Mahanadi’s downstream.

“Since last 18 years, the State Government has not saved a bucket of water in the catchment areas of Mahanadi in Odisha,” he said.