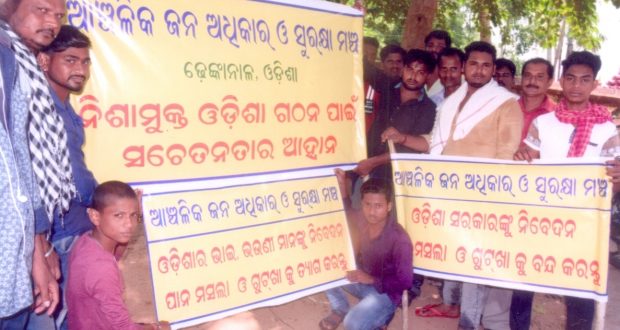 Dhenkanal:1/06/18;Members ofAnchalika  Jana Adhikara &Surakhya Mancha urged the state Government to ban sale of gutkha and make odisha tobacco free state.Preventation is better than cure many people are affected bvy various diseases consumption of gutuka and Pan masala,the members said.The members of the organasation took out a massive rally lead by popular social activist Benhdhar Sahoo  and executive president for promoting awareness on  ill effects tobacco.The rally started from Gadasila andculminated at Dhenkanal town.thousands of people including youth in large numbers participated in the impressive rally by holding placards to ban the harmful product, While union territory Chandigarh has effected a ban on it, Kerala banned pan masala and gutkha containing tobacco under the Food Safety and Standards (Prohibition and Restriction on Sales) Regulation, 2011.